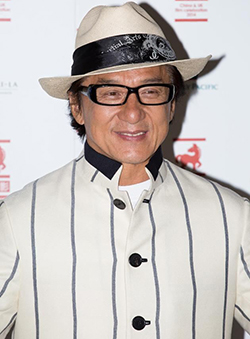 JACKIE Chan has revealed he would like to play a villain in The Expendables 4.
The martial arts star said he would be up for joining the fourth instalment of the action franchise, led by Sylvester Stallone, but doesn’t want a cameo role.
“I (want to be) against all the Expendable guys, but as a good-bad guy. I’m a good guy at the end,” he said. “If I go against them, I stand out. Otherwise I’m (part of) the group.”
Jackie said Sly wanted him to appear in the second and third Expendables films.
“He liked me to join 2 and 3 but at the time, I was doing Dragon Blade in the desert,” he said.
“If the script is right, (there aren’t) that many people and my part is more important – it’s not just coming in for three seconds or two minutes and then ‘Bye’ – I would do it, especially with so many big stars.
“Sly, I thank him so much. He really helped me to get into the Hollywood market. I’ll do almost whatever he says I should do.”
The 60-year-old actor also gave an update on the follow-ups to The Karate Kid, Rush Hour and Shanghai Knights.
“Karate Kid 2, the script is almost done, Rush Hour 4 script is just starting and Shanghai Dawn, if Owen agrees and I agree, then we’ll look for the script. And I start another new movie, Skip Trace, at the end of this month,” he said.
Jackie added: “Directing, I can do any time. I’d like to do more films like the Karate Kid where I can teach young children how to fight, or The Expendables 4 or a drama.”Advertisement