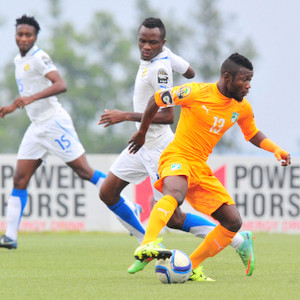 CAMEROON were torn to shreds in 17 minutes of extra time as Ivory Coast produced a sterling performance to beat the Indomitable Lions 3-0 in emphatic fashion in Saturday’s quarterfinal at the The 2016 African Nations Championship (Chan).
After the game ended in a 0-0 draw in regulation time at the Huye Stadium in Butare and looking like it was heading for the lotteries of penalty shootouts, substitute Koffi Davy Mahinde rose highest to break the deadlock in the 95th minute with a bullet header from a Yannick Zakri corner to give the Ivorians the lead in a tense game.
Six minutes later the Cameroon defence were caught napping as an onrushing Atcho Herman Djobo pounced on a loose ball to head in the second goal past a hapless Hugo Patrick Nyame in Cameroon goal as they took a commanding 2-0 lead.
The Elephants were not done as they continued pilling pressure on the Indomitable Lions and in the 113th minute skipper Yao Serge N’Guessan produced a slice of brilliance scoring a wonder goal, perhaps a contender for goal of the tournament, from the halfway line in a well calculated strike that beat a back-peddling Cameroon goalkeeper Nyame.
Earlier in the game it was a see-saw affair as both sides sought to get the important goal. Ivory Coast captain and midfielder N’Guessan hit the post from long range with Nyame well beaten.
In the 45th minute Cameroon goalkeeper played a long diagonal ball and his teammate Nicolas Brice Moumi struck the ball wide off the target as the game went to the break.
The second half was no different as both sides failed to break the deadlock as the game ended on a scoreless note, needing 30 minutes of extra time to decide the winner.
The win for the Ivorians have ensured they reach the semifinals alongside DR Congo who had earlier beat Rwanda 2-1 in the first quarterfinal game played at the Amahoro Stadium.Advertisement