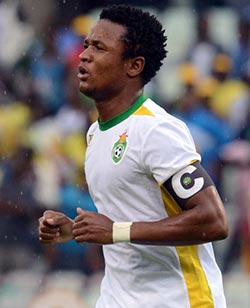 Zimbabwe 0-0 Libya
(Libya won 5-4 after penalties)
ZIMBABWE agonisingly crashed out of the 2014 Africa Nations Championship (Chan) after suffering a penalty shootout defeat to Libya in the semi-finals on Wednesday.
In a drab encounter that ended goalless after extra time, Libya powered to a 5-4 penalty shootout win, after having got to the semi-finals in similar fashion by dumping out Gabon through penalties.
For all his spirited saves, Warriors’ giant goalkeeper George Chigova ended up a loser as his teammates could not convert in the sudden-death of the lottery.
Chigova kept his team in the shootout after stopping two successive penalties, but teammates Ali Sadiki, Milton Ncube and Peter Moyo failed to convert their chances. Eric Chipeta, Dannu Phiri, Hardlife  Zvirekwi and Patson Jaure scored their kicks.
Libyan goalkeeper Mohamed Nashnush Abduala made two penalty saves and converted one to see his side through.
Meanwhile, it was a fourth draw in regulation time for the Libya Mediterranean Knights, but at the end of the day it counted to carry them into Saturday’s final as they seek a first continental title.
For Zimbabwe, a dream ended for a side largely tipped to storm into the final on the backdrop of convincing displays in the previous two matches before their demise.
The Warriors’ belief could be sensed as Sadiki’s shot rose just over the bar seven minutes into the match.
But Libya responded through Mohamed Ghanudi who headed narrowly high from an Ahmed Al Maghasi cross six minutes later.
It was a dull first half where no meaningful chances were then created by either side and the match already pointed toward a draw.
No team could penetrate the other thanks to their defences, especially Zimbabwe’s backline who afforded Chigova an off day as he was never invited to thwart any danger.
Elmedhi Elhouni had a clear way to shoot, but took long to control the ball before being dispossessed by Zimbabwe captain Partson Jaure on 26 minutes.