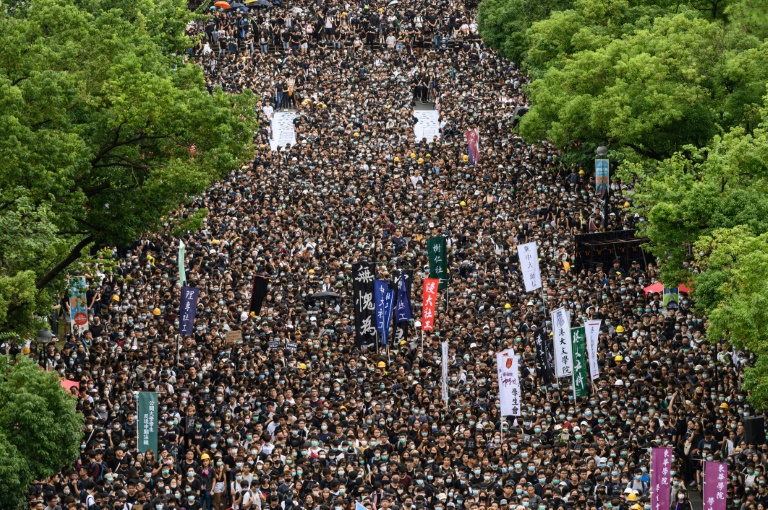 Pro-democracy protesters Wednesday stepped up a “blossom everywhere” campaign of road blocks and vandalism across Hong Kong that has crippled the international financial hub this week and ignited some of the worst violence in five months of unrest.

The new phase in the crisis, which has forced schools and shopping malls to close as well as the shutdown of large chunks of the vital train network, prompted police to warn on Tuesday the city was “on the brink of total collapse”.

China, facing the biggest challenge to its rule of the territory since it was handed back by the British in 1997, has insisted it will not buckle to the pressure and warned of even tougher security measures.

On Wednesday, commuters across many parts of the city woke to the increasingly familiar scenario of roads choked with bricks, bicycles, couches and other materials that had been laid out by the protesters overnight to block traffic.

Various lines on the subway — used by more than half of the city’s 7.5 million people daily  were also suspended due to vandalism, forcing many workers to stay at home. Dozens of bus routes were also affected.

Meanwhile, masked protesters dressed in their signature black were locked in a series of tense standoffs at university campuses following battles on Tuesday that continued through the night, with police firing tear gas and rubber bullets.

Highlighting the growing security fears, mainland Chinese students began fleeing Hong Kong on buses and boats back across the border, according to police and universities.

It was not immediately unclear how many students were leaving on Wednesday, although television footage showed dozens of students lining up at a Hong Kong ferry pier purportedly to get on a police boat and be taken away.