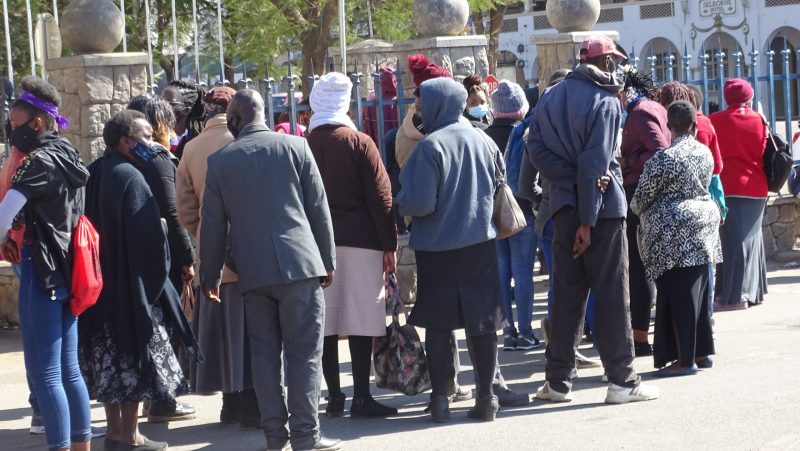 As early as 7 am, there were long queues at most of the vaccination centres in the city as vendors heeded government’s call to get inoculated as Covid-19 cases soar.

Long queues were observed at Large City Hall and Stanley Square vaccination centres where people failed to observe social distance as they jostled to access the jab.

At the Large City Hall, scores of vendors were. However, turned away after failing to produce their vending licences.

“We were informed by our association’s representatives that we should go and get vaccinated today (Tuesday). However, we are surprised that we are now being asked to produce vending licences,” said one vendor who sells second-hand clothes.

“I do not have any vending licence because I do not have a permanent place to trade from. They should have told us that vendors in my situation cannot access the vaccine rather than waste our time.”

Another informal trader added: “I was here around 7 am hoping to be one of the first people to be vaccinated. The nurses told me that they cannot vaccinate me without a trading licence. I am renting a small space in a shop and the owner is the only person with a licence. We wonder why we are being discriminated against.”

He claimed some workers were bussed by their companies and were prioritised ahead of the genuine vendors.

NewZimbabwe.com news crew also observed that some companies were transporting their workers to the vaccination centres.

In a later interview, the Bulawayo Vendors and Traders Association (BVTA) director Michael Ndiweni confirmed some vendors were turned at vaccination centres for failing to produce vending licences.

“We have received reports that some vendors are being turned away at the Large City Hall because they do not have vending licences. As you know, most of our members rent spaces at private markets so they pay directly to the owner who allows them to trade inside their premises. So, this is the category of vendors who are being turned away,” he said.

Ndiweni said some vendors employed their own workers and these employees were also turned away before he urged government to employ mechanisms which do not disadvantage anyone.

“We are calling on authorities to put in place a system which does not short-change genuine frontline workers. For example, the landlords can provide a list of all vendors operating at their premises.”

The government has embarked on a mass vaccination exercise targeting the informal sector which has been identified as a Covid-19 hotspot.

Bulawayo is targeting to vaccinate at least 400 00 residents to achieve herd immunity amid soaring cases and deaths which have been experienced in the last few days.