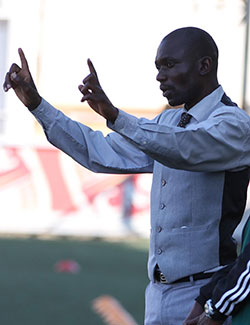 CHAPUNGU coach John Nyikadzino saved himself from the sack after a 1-0 win over Highlanders two weeks ago.
And now he wants to further cement his hold on the job with a home win against ZPC Kariba when the two teams clash in re-arranged Castle Lager Premier Soccer League match at Ascot Stadium on Wednesday.
The match was called off three weeks ago due to a waterlogged Ascot.
Chapungu’s win over Bosso was their first of the season and the first time they had scored in four league matches and Nyikadzino is confident they can pick up maximum points again.
“We have been playing well, but we were lacking in front of goal and I am happy we scored against Highlanders and won the match.
“That gave us confidence but then we had a week’s break, but I am sure the boys will rise to the occasion,” he said.
The Bosso win lifted Chapungu off the bottom to 11th place with four points while ZPC are on eight points after two wins and two draws and lie in fifth place.
The Airforce of Zimbabwe side does not have the big names but will rely on Allen Tavarwisa, Tafadzwa Mombeshora, Rodwell Mhlanga and ageless striker Phillip Marufu.
ZPC are coming from a 1-0 win over Caps United in the Independence Trophy third place play off at White City and will be eager to close the gap on joint leaders Triangle and Dynamos.
“It was good to beat Caps United. They are one of the big clubs in Zimbabwe and when you beat teams like these, it makes you believe in yourselves,” coach Saul Chaminuka said after the Uhuru play-off.
“This win is good for us as we now prepare to take on Chapungu. We will be on the road again and we just pray that fatigue will not affect us.
“What is left is to prepare well for Chapungu. We are not taking them lightly because remember they beat Highlanders away. They are dangerous.”
The leading duo has 13 points and if ZPC – last season’s runners up – win, they will cut the deficit to two points.
Key to ZPC’S plans are Pride Tafirenyika, who scored against Caps, Russel Madamombe and the league’s leading scorer Raphael Manuvire, who has four goals so far.