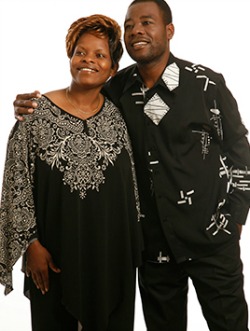 PASTOR Charles and Olivia Charamba landed at Johannesburg’s OR Tambo International Airport on Thursday afternoon to join their group the Fishers of Men for the first ever live concert in in South Africa.
Billed as a Family Gospel Concert, Zimbabwe’s most influential gospel music couple will perform at Wits University Great Hall in Johannesburg on Saturday and at AFM Kempton Park on Monday with both shows starting at 12 mid-day, helping warm the hearts of their followers in the bitter South African winter.
“We would like to use this opportunity to re-connect with our fans in South Africa propagate the gospel of Christ and introduce our music to a wider South African audience,” said Pastor Charamba.
A representative of the promoters added: “We selected safe and secure venues where hard working folks can take time out from their busy schedules and enjoy spiritually fulfilling music with their families.”
Popularly known as “The First Family” of gospel music, the Charambas are arguably the best-selling gospel artists to emerge from Zimbabwe and, backed by Fishers Of Men, their music has found appeal with a wide cross-section gospel fans both within and outside the country.
The duo released their debut album in 1997 and, over the years have released albums such as Johane 3:16, Vhuserere, Amen, Daily Bread, Exodus, Sunday Service and Verses & Chapters to mention but a few.
Charles Charamba remains one of the largest selling gospel artists in Zimbabwe where music sales are dominated by the sungura offerings while Mai Charamba has also emerged to be one of the country’s most successful female artists.
The couple are both pastors and are well travelled, having toured the UK, USA, and other parts of the world with their music and ministry and have shared stage with the likes of Ron Kenolly, Peter Crouch, Solly Mahlangu, Sipho Makhabane.
Economic challenges which hit Zimbabwe beginning around 2000 resulted in hundreds of thousands of people crossing the Limpopo and making South Africa their new home.
The cultural influence of this community is starting to permeate the local gospel music scene with the hit “Itshokwadi” by Joyous Celebration which derived from popular Zimbabwean choruses topping SA charts.
Pastor Charles Charamba has also produced a string of best-selling albums, won accolades including those of best gospel artiste in the Zimbabwe Music Awards, National Arts Merit Awards, Song and Video of the Year and a Lifetime Achievement and draws massive crowds to his concerts locally and abroad.Advertisement

He has also impacted many people with lyrics covering a broad spectrum of themes ranging from evangelical to commentary on current issues such as family, worship, the HIV pandemic, and social ills. His popularity started growing with his chart-topping albums like “Exodus”, and “Sunday Service” from which came the hit “Mhinduro Iripo”
His last production “Pashoko Pangoma” has a rich in “sungura” beat and inspiring lyrics and also proved to be his best album. It featured songs such as “Regera Kundisiya”, “Ndakaurayisa Jesu” and “Jehovha Ndiye” and the hit “Nyika ye Zimbabwe” which has been described as “an intercession prayer” because of its bold message on the need for God to bless Zimbabwe.
On the other hand Mai Charamba reached number one with her 2000 debut album, Amen, which featured songs composed by her husband including ‘Daily Bread’ while her last offering The Gospel was quite a hit. ‘Amen’ won Mai Charamba an award for the Best Gospel Album of the year.
Both ‘Daily Bread’ and ‘The Gospel’ went platinum, selling more than 100,000 copies within a year of release date. She has won numerous awards in categories that include Best Female Musician, Best Gospel musician, Best Gospel album, Most Outstanding Female Musician.
Meanwhile, the concerts will be opened by up-coming gospel artiste Tsitsi Kudita of Mufaro Wangu fame and promoters said tickets being sold through Computicket and all the outlets of Shoprite/Checkers across South Africa.