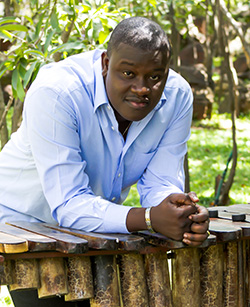 IF CHRIST were to return and choose a substitute miracle to changing water into wine, he would probably choose to change ordinary music into the new album freshly unleashed by Charles Chipanga instead.
It’s a great substitute for fine wine and food for the soul. As well as a spiritual remedy for many of life’s challenges as we know them!
Which probably explains why the former Oliver Mtukudzi and the Black Spirits’ key marimba and percussion genius agrees that he is not a stereotype gospel musician, that would be limiting the otherwise limitless journey his music gifts the listener.
“True, I would like to say I play spiritual music that draws its lessons from the Bible as well as day to day life that preaches about replenishing the deficiencies of the soul,” he says with a calm wisp of confidence and charisma.
For the young Charles who ventured along with his wife Namatayi to start a solo career, he has hardly put a foot wrong in an industry that is just fit for the most enduring. And three albums combined later under the Chalenam stable (his and his wife’s names combined), Charles has put together an amazing musical odyssey in the current album.
It is a ten-track walk in an oasis of musical and lyrical magic with a mature genre of jazz and contemporary sounds that drip on the ear that listens to it. Divinity in musical motion no doubt.
“My music appeals to the mature listener; that is true. It’s the way I like to communicate my messaging and the blend of instruments is such that it finds the mature listener being drawn inevitably to it,” says Charles.
And effortlessly, because of his mature approach to music, he has managed what is almost an impossible feat; attracting the attention of the foremost voice in modern gospel music as we know it; that of Baba Charles Charamba, who has lent his voice to one of the tracks on this brand new effort entitled Ndezvamwari. And Charles knows attracting the golden voice of his namesake is a masterstroke of immense proportions.
“It was a blessing to have pastor Charamba helping out on the album. He is a torch bearer and everybody singing to feed the spirit would be more than ever so proud to have him contribute in an album or song,” he agreed.
And he is arguably the first artiste outside of Mai Charamba that the godfather of gospel music has performed a duet with in a commercial effort.Advertisement

Charles is no stranger though to collaborations himself, having handcrafted a nugget of a track with Sungura ace Suluman Chimbetu in one of his earlier efforts as his loyal fans will remember. And the track ‘Talk To Somebody’ proved that Charles effortlessly blends in his duets, which then also featured wife Namatayi.
This fresh effort oozes with sweet succulent spiritual efforts that will have people warming up to the album. In the aftermath of a blistering winter season, this is just the right thing to warm the spirits and feed the soul to a fresh new musical spring.