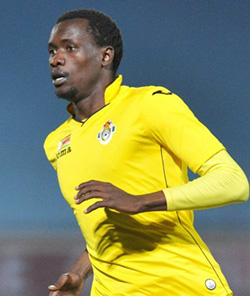 SOUTH Africa: Highlands Park co-chairman Brad Kaftel says Zimbabwean striker Charlton Mashumba will remain with the club next season as they have not received any offers for his services.
The Lions of the North will be campaigning in the National First Division next season following their relegation from the Absa Premiership, with many of their players’ futures in doubt following their disappointing campaign.
One such player is Mashumba, who only arrived at the start of the season from Jomo Cosmos, yet club management insists he is going nowhere.
“Charlton has two years to go on his contract,” Kaftel tells KickOff.com.
“He is a Highlands Park player, no club has made us an offer to purchase him.”
According to Kaftel, the club will not make any changes to the technical team for next season as they are happy with co-coaches Thierry Mulonzo and Les Grobler in charge.
“Our coaches are Thierry Mulonzo and Les Grobler and we aren’t talking to anyone else at this stage, and I’m not in discussions with any other club to sell any players,” he said.
Previous coach Gordon Igesund parted ways with the club at the end of April following a poor run of form at the helm.Advertisement