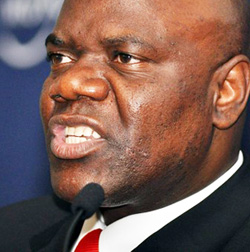 ARTHUR Guseni Oliver Mutambara, a world-renowned robotics professor and one of the most intriguing figures in Zimbabwean public life, has rarely written about the private dimensions of his life – until now.
In this 249-page memoir, In Search of the Elusive Zimbabwean Dream: An Autobiography of Thought Leadership, the first of a three-book series that explores his thoughts and philosophical disposition over a period of 35 years, he delivers a fascinating, provocative and rigorously engrossing tour de force.
Volume one is sub-titled The Formative Years and the Big Wide World (1983-2002).
But what exactly is “the Zimbabwean dream”? Before we even venture there, we must also ask: what does it mean to be Zimbabwean?
This is a nation which held immense promise at independence in 1980. The Zimbabwe dollar was stronger than the US dollar. The country boasted sub-Saharan Africa’s most industrialised economy after South Africa.
Today, 37 years later, there is no national currency. The UN says the rate of formal unemployment has reached a staggering 95% and 72% of the population lives in “extreme poverty”. What “dream” can the world possibly expect from a country led by a 93-year-old president who is eyeing re-election next year?
Surely, dreaming is for tomorrow’s people, not yesterday’s men.
To locate the Zimbabwean dream, we must trace its roots. Mutambara, who turned 50 on May 25, proffers a compelling argument. In his eyes, the Zimbabwean dream can only be realised, first, through a shared national vision and, second, through the creation of what he terms “brand Zimbabwe”.
“For example, we could aspire to make Zimbabwe a globally competitive economy, a prosperous nation with a high quality of life for our people by 2040. Ostensibly, we can then conceive three supporting pillars for this vision. The first pillar should be about the economy, while the second focuses on society, and the third pillar deals with our politics,” he writes.
Mutambara is at his eloquent best when he elucidates the meaning of “a shared Zimbabwean dream”. He does not prescribe a formulaic dream but proposes the collective thought process that could lead to the expression of “a quintessentially Zimbabwean Dream”.
Here his narrative – flowing crisply in present continuous tense – teases and tantalises. Can Zimbabweans dare to dream, in spite of all their well-documented woes? Unfortunately, in this part of the autobiography there is not much meat for readers to really sink their teeth into. But wait a minute, could this be the rocket scientist’s way of rousing our curiosity ahead of the publication of the next two books in the trilogy?Advertisement

As I read this book, the meaning of “thought leadership” permeated my musings. When Joel Kuntzman, editor-in-chief of Booz, Allen & Hamilton magazine, coined the term in 1994, he emphasised the importance of having ideas “that merit attention”. Mutambara defines the term as “intellectual influence through innovative and pioneering thinking”.
As a journalist, I have found the concept of “thought leadership” captivating. A related term is “public intellectual”. The legendary rabble-rouser Christopher Hitchens, who shares Oxonian leanings with Mutambara, once famously remarked that the duty of the intellectual is essentially twofold: first, to argue for complexity and to insist that phenomena in the world of ideas should not be sloganised or reduced to easily repeated formulae and, second, the intellectual must show that some things are simple and ought not to be obfuscated.
In an intellectually robust and bare-knuckled manner that has come to typify his persona, Mutambara traces the thread of values that has defined his journey from high school top-achiever, leading scientist, business consultant and his eventful plunge into the cauldron of Zimbabwe’s notoriously unforgiving national politics.
There are startlingly vivid accounts of Mutambara’s stand against President Robert Mugabe’s fevered machinations to impose a one-party state in the late 1980s. Amid economic meltdown at the time, students at the University of Zimbabwe (UZ), led by Mutambara among other organisers, displayed amazing bravery and struck a chord with the toiling masses.
Like most Zimbabweans of his generation, Mutambara was an ardent supporter of the national liberation project. In those days, he even described Mugabe as “our upright and incorruptible revolutionary”. But when the revolution went off the rails as corrupt and autocratic leaders subverted the people’s struggle, he committed himself to mobilising against them.
One of the most vexing puzzles in Zimbabwe in the aftermath of the power-sharing Government of National Unity from 2009 to 2013, has been: Where is Arthur Mutambara these days? The autobiography will answer the question. After the 2013 general election, he withdrew from political life. The former deputy prime minister is currently president of the African News Agency, a technology-driven multimedia news platform.
Among the formative experiences in Mutambara’s life was the anti-corruption demonstration of September 1988 by UZ students. He was secretary-general and authored a statement denouncing Mugabe’s government.
In October 1988, Mugabe denounced the protesting students, dismissing them as foolish renegades, and abruptly terminated the state-funded grants and loans of 14 of the 15 students’ union leaders. But they could not touch Mutambara – his university education was being financed by an Anglo American Corporation scholarship. Despite expending his energies on what he describes as “revolutionary confrontation”, he did not neglect his studies and continued winning the university’s coveted book prizes.