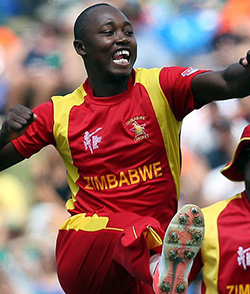 BOWLER Tendai Chatara is battling to be fit for Zimbabwe’s second ICC World Twenty20 tournament qualifier against Scotland in India on Thursday.
The first-round Group B match is at the Vidarbha Cricket Association (VCA) Stadium in Jamtha, Nagpur.
Earlier Wednesday, the fast bowler complained of pain on the left side of the stomach and presented with an abscess for which he was sent to hospital for treatment. He spent the latter part of the day resting in his hotel room.
“He still has a chance to play in (the) game against Scotland and it will entirely depend on the assessment which I will do (in the) morning,” said Zimbabwe physiotherapist Anesu Mupotaringa.
Chatara says only extreme pain that would compromise his bowling action will stop him from declaring himself available for selection because he wants to build on his performance yesterday when he took two wickets for 28 runs in four overs, in Zimbabwe’s 14-run victory over Hong Kong, at the VCA Stadium.
“I am determined to play and I want to do better than (Tuesday against Honk Kong) which was my first international match since my return,” said Chatara, who had months of recuperation last year after he broke his left shin in April, while playing football in his home-town Mutare during the off-season.
He spent five months out of the game, much of that in a cast. Then followed physiotherapy and a gradual easing back into play since December last year, which has seen him play one 50-over and four Twenty20 matches for his provincial side, Mountaineers.
“(On Tuesday) I really felt that I was back. Hopefully I will be fit enough for selection tomorrow so that I can do my bit to help our qualification,” said the 25-year-old Chatara.
The national selection panel has Tawanda Mupariwa on standby.
“We will make our final call tomorrow,” said convenor Kenyon Ziehl, adding: “We have also included TC (Tendai Chisoro) in the equation just in case we find out that the wicket is spin-friendly.”
After the match against Scotland tomorrow afternoon, Zimbabwe will play their third and final qualifier against Afghanistan on Saturday – also at the VCA Stadium.
If they win their qualifying pool, Zimbabwe will join England, South Africa, defending champions Sri Lanka and the West Indies in Group 1 of the ICC World Twenty20 tournament’s Super 10 stage.Advertisement

The winner of qualifying Group A which has Bangladesh, Ireland, the Netherlands and Oman will join Australia, India, Pakistan and New Zealand in Group 2 of the Super 10 stage.