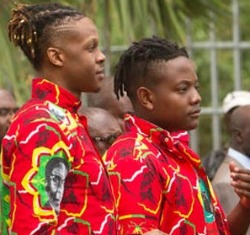 THE party loving sons of former president Robert Mugabe officially launched their entertainment company, Trip Life, at an exclusive Sandton night club in Johannesburg.
For several weeks and without knowledge of the impending military takeover, Robert Jnr and Chatunga Mugabe have been meticulously planning a lavish launch for their entertainment company, Trip Life.
The company focuses on event promotion, club launches and bringing international and local artists to Zimbabwe and South Africa.
Mugabe’s sons have publicly announced their company by hosting a mini concert at the exclusive Harem night club in Sandton.
While Nigerian artist Tekno was billed as the main act and set to headline the concert in Harare, he failed to make an appearance with American-Nigerian muso Jidenna performing instead.
“Tekno Zim Show Cancelled! It is with regret and sadness that Triplife Entertainment announces the cancellation of its high-profile gig featuring Nigerian Star, Tekno.
“After doing everything in our power to ensure that all was set for the artist’s debut performance in Harare on November 24, unforeseen circumstances beyond our control interfered and jeopardised the event,” read a statement by Trip Life.
Cassper Nyovest who is set to host his own mega concert at FNB stadium on Saturday, also performed.
On Instagram, Robert Jnr posted several videos of himself and his brother with friends partying while sipping on bottles of Veuve and other expensive champagne and alcohol. A bottle of Veuve goes for no less than R2 000 at Harem.
Mugabe’s sons are popular for their playboy lifestyles which they unashamedly showcase on Instagram and Facebook. Earlier this month, Chatunga posted a video of a $60 000 watch, on which he poured champagne and captioned: ‘$60 000 on the wrist when your dad run the whole country ya know.’
After the army coup which took place on 15 November, the Mugabe sons kept a low profile and stayed away from social media. The only time they broke their silence was when Chatunga posted an update on Facebook, declaring that a ‘revolutionary leader can’t be fired.’
Reports emerged that the boys were cooped up in their half-brother’s R43 million mansion in Sandton. A week after the coup and with their father’s downfall imminent, the boys began posting about the launch of their entertainment company.Advertisement

The opening of the company comes less than three months after they were involved in an incident in which their mother, Grace allegedly beat model Gabrielle Engels with an extension cord at a luxury Sandton apartment.
Grace is said to have been furious with her sons after she found them partying with a host of models at their upmarket pad.
Though Grace submitted an affidavit stating that she was attacked first and acted in self defense, Afriforum is still pursuing charges of assault against her.