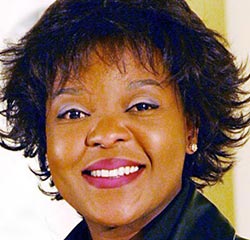 FORMER SABC news anchor Alice Chavunduka has been described as a true professional and pleasure to work with by former colleagues.
Chavunduka died on Sunday, after suffering an epileptic seizure at her home a week before her death.
She was found unconscious and was rushed to hospital where she spent a week in a coma. SABC television news and current affairs Managing Editor Amina Frense has described her death as a great loss.
“I worked personally with her, she was one of my presenters, I had direct contact with her on a daily basis. She always had a very pleasant disposition, quite a pleasure to work with, I think she really set the bar, the standards.”
Frense says: “There were so many little Alice Chavanduka wannabe’s, because she was such a great role model, a great presenter and we are sad by her passing and we want to pass on our condolences to her family and loved ones.”
Born in Zimbabwe, her father was Professor Gordon Chavunduka who served as vice chancellor of the University of Zimbabwe.
At 23, Chavunduka made television history when she become the first black female news anchor on the SABC’s former “white” TV channel, TV1, alongside news readers Jane Hicks and Anand Naidoo.
In the same year, on 2 January 1992, Chavunduka also became the first black female presenter of the SABC and TV1’s then (and only) morning breakfast show, Good Morning South Africa.
It was a meteoric rise for the Zimbabwean girl, who at 12, became that country’s youngest presenter ever of children’s radio programmes on the Zimbabwean Broadcasting Corporation (ZBC). Chavunduka went on to host radio programmes on Zimbabwe’s Radio 1 and Radio 3 and by 18 she was a TV news reader in that country.
The telegenic news reader came to prominence in SA as part of the massive sea change which swept the SABC following the first democratic election in 1994, with Chavunduka who became a fixture for years as the prime time news anchor.
As the prime-time news anchor on SABC3 of the daily news bulletin, Chavunduka often joked that she “didn’t speak English like other Zimbabweans” as the news anchor of Newshour next to her co-anchor Chris Gibbons.
Twenty years ago, SABC3 was the broadcaster’s new English language TV channel of the SABC’s three newly restructured channels and Chavunduka – with her consummate English and news anchor professionalism – was unquestionably its biggest news star.Advertisement

In later years Chavunduka, an avid collector of music, became a presenter for the business news TV channel Summit TV (now Business Day TV) on DStv.
She also presented on Radio 702 and 94.7 Highveld Stereo where she did The Alyce Chavunduka Show.
In February 2004 Chavunduka returned to TV to present M-Net’s pan-African entertainment magazine programme Studio 53.
She appeared in two films as “herself” – a news reader in Sweet ‘n Short (1991) and again as a news reader in In my Country (2004).