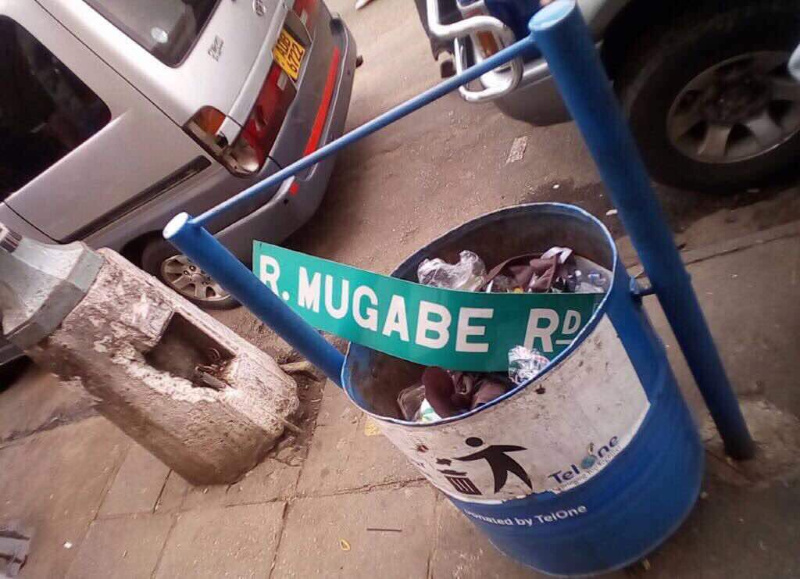 A KWEKWE City Council worker is reported to have illegally changed Robert Mugabe Road to Emmerson Mnangagwa Road, a decision that has left councillors fuming over the name changes without following procedures.

Speaking after a full council meeting, Kwekwe Deputy Mayor Shadreck Tobaiwa said the city fathers were recently shocked when they discovered that the street’s name had been changed without their authority.

After confronting the city’s management over the issue, the councillors were told that an unnamed council worker had changed the names without authority.

“We were not consulted on the renaming of the road. As councillors, we were kept in the dark of the whole process. We were shocked to wake up one morning and see the road renamed to Emmerson Mnangagwa from Robert Mugabe without any consultation,” Tobaiwa said.

“After we consulted management, we were told that a city employee had changed the road insignia after the Robert Mugabe sign fell following heavy rains. The worker decided to put up a new sign with Emmerson Mnangagwa’s name.

“We are, however, consulting lawyers on the issue on what it entails and what must be done as a way forward.”

Kwekwe is the hometown of Mnangagwa and the new street sign remains in place.

Meanwhile, Kwekwe councillors have resolved to honour the late MDC founder Morgan Tsvangirai by renaming a street in the town after the opposition leader.

Tsvangirai was a Prime Minister from 2009 to 2013 during the now defunct Government of National Unity (GNU). He died in February 2018.

Speaking after a full council meeting last Friday, Kwekwe Deputy Mayor Shadreck Tobaiwa said councillors were in agreement that a road should be named after late opposition president.

However, Local Government Minister July Moyo was yet to approve the request.

“Councillors indicated that the same honour of renaming Robert Mugabe Road to Emmerson Mnangagwa must be extended to the late Prime Minister Morgan Tsvangirai,” he said.

“Councillors opined that council can look for any other road and name it after Tsvangirai since he sacrificed a lot for the country.”

The MDC is in control of the Kwekwe Town Council with 13 councillors out of 14. Zanu PF holds the other council seat.