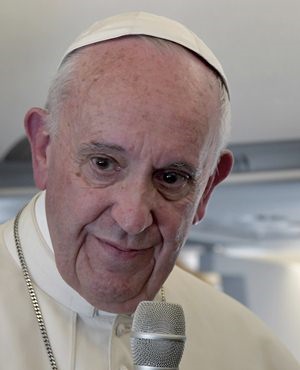 POPE Francis landed in Kenya’s capital Nairobi Wednesday on the first leg of a landmark three-nation trip to Africa, greeted with cheering crowds and traditional dancers.
As the papal plane trundled across the tarmac, a Kenyan and a Vatican flag flying from the front, crowds decked in brightly-coloured clothes, arms around each other’s shoulders, bounced up and down waiting for the plane to halt.
Stepping onto the red carpet, the 78-year-old pontiff nodded in greeting, smiling broadly as the excited crowd erupted into cheers, whistles and ululations of joy, and a choir burst into song.
Dancers, some in traditional feather headdresses, colourful dresses and beads, leapt high into the air, as Francis was met by Kenyan President Uhuru Kenyatta with a red carpet welcome.
The pontiff, who will also visit Uganda and troubled Central African Republic (CAR) before flying back to Rome on Monday, is expected to call for the need to address inequality to ensure peace and end conflict.
On a trip fraught with security concerns, thousands of police and troops have been deployed with key roads closed in the capital Nairobi, to ensure the visit is peaceful.
Al-Qaeda’s East Africa branch, the Shebab, have launched a string of attacks against Kenya because they have troops deployed in Somalia.
‘More worried about the mosquitoes’
Francis said he was delighted to make his first visit to Africa.
“I go with joy to meet Kenyans, Ugandans and our brothers in Central Africa,” he said during the flight to Kenya, where he played down fears for his safety, joking he was “more worried about the mosquitoes.”
Vast crowds are anticipated in the capital at a giant open air mass on Thursday, which has been declared a public holiday.
Kenya’s Daily Nation newspaper said the country was honoured to welcome Francis as his first stop.
“It is a momentous day and heralds joy and hope for the people of Kenya,” the editorial read.
A packed schedule will see the pope visit a Nairobi slum, a shrine to Christian martyrs in Uganda and both a mosque and a refugee camp in CAR. A total of 19 speeches will include a major statement on the environment ahead of the Paris climate change summit.
“Karibu (Welcome to) Kenya” read Wednesday’s headlines in both the Standard and Star newspapers while the Daily Nation reported that elders from the Kalenjin tribe in the Rift Valley were planning to travel to Nairobi to present Francis with a bull.Advertisement

With the bulk of the planned events outdoors, there were fears the unusually heavy ‘El Nino’ rains forecast for later in the week could prove extremely challenging with many fearing local infrastructure will be unable to cope.
Ugandan police spokesman Fred Enanga has said security will be “heavy” and that airforce surveillance planes would be deployed “to ensure our skies are clear of any possible threat.”
The CAR leg of the trip has been maintained despite warnings from French peacekeepers there that they cannot guarantee Francis’s security.
In John Paul II’s footsteps
Vatican officials say a last-minute change of programme will only happen if Francis is made aware of a precise threat that could endanger the thousands of believers expected to come and see him, many of whom will be travelling long distances from neighbouring countries.
Francis is scheduled to use an open-topped Popemobile during the trip.
Aides say he is determined that the sombre context will not affect his plans, particularly for the CAR part of the trip, where he is due to open a “Holy Door” in Bangui’s cathedral 10 days before the start of a Catholic Jubilee Year dedicated to the themes of forgiveness and reconciliation.
Francis is the third pope to visit Africa, a continent which now counts one in six of the world’s Catholics and whose importance to the Church is set to grow significantly over the coming decades.
Paul VI became the first pope of modern times to set foot in Africa when he visited Uganda in 1969, while John Paul II, dubbed “The African” by a senior cleric, managed to visit a total of 42 countries on the continent during his long papacy.
With international climate change talks in Paris coming up immediately after the African trip, there will be particular interest in Francis’s comments when he visits the Nairobi headquarters of the UN’s Environment Programme (UNEP) and Human Settlements Programme (UN-Habitat).
In Uganda, he will honour Christian martyrs, celebrating a mass to commemorate the first African saints — 22 young men burned alive in 1886 by royal order because they refused to renounce their faith or become sexual slaves.