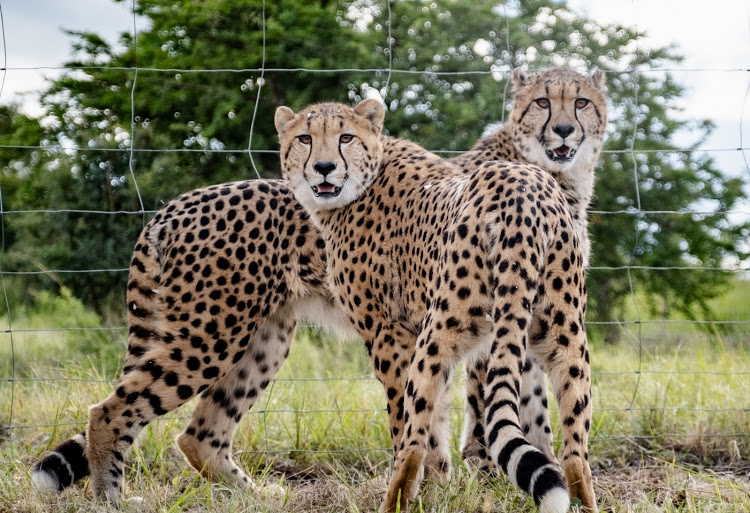 Brothers Jabari and Kumbe, all the way from Canada, have a new home in Zimbabwe
Spread This News

A MISSION to save Zimbabwe’s dwindling cheetah population in early February saw the arrival of two cats born in 2019 at the Hemmingford zoo in Quebec, Canada.

Director of the facility Nathalie Santerre said the cheetahs were chosen for their gene pool to help Zimbabwe’s struggling animals.

The brothers, Jabari and Kumbe, were flown to Zimbabwe and introduced into the wild at the 4,500-hectare Imire Rhino and Wildlife Conservation park in Mashonaland East.

Separated from their mother, Cleo, and sisters Asani and Dalia, the cats have entered a different world, where they will have to find their own food, integrate into the wild and find mates.

But for now, under the care of respected wildlife conservationists, husband and wife Candice and Reilly Travers, the rewilding process is off to a careful but slow start.

“The cheetahs will experience a huge change coming from the colder climatic conditions in Canada to their more natural climate here in Africa,” said Reilly, the conservancy’s wildlife manager.

For now, the boys are being fed daily within their boma enclosure. They are getting used to venison meals, usually impala. As they adapt and progress we will begin teaching them to hunt wild prey using lures and techniques.

Because the pair were born and raised in North America, their bodies are adapted to conditions there. Hence, in a few weeks to months, there will be notable changes in their appearance.

“Cheetahs naturally build thicker coats in times of cold, which they will slowly shed and moult as they adapt to the warmth of Zimbabwe,” he added.

The rewilding process is the first the Travers have been engaged in. Depending on their success with Jabari and Kumbe, they will welcome more wildlife species from across the world.

“For now, the boys are being fed daily within their boma enclosure. They are getting used to venison meals, usually impala. As they adapt and progress we will begin teaching them to hunt wild prey using lures and techniques,” Reilly said.

Candice added: “The property (game park) is the perfect size for a two-male coalition and the cheetahs will not have to compete with other large predators.”

It is estimated it will take six months to a year for the pair to start behaving as if they were born in the wild.

The programme is in partnership with British charity, The Aspinall Foundation, which works to promote wildlife conservation. The foundation employs British prime minister Boris Johnson’s fiancée, Carrie Symonds, as head of communications.

Symonds told UK media that “this will be the first of its kind for Zimbabwe, which has never before received captive-bred cheetahs for rewilding. Will keep you updated on how the brothers get on in their new home!”

Zimbabwe Wildlife and National Parks (ZimParks) spokesperson Tinashe Farawo told Sunday Times Daily that the transfer of the animals was a private arrangement whose bigger picture was to help tourism in that country.

“All we did was assist with paperwork. We are happy with it and besides helping our cheetah population, it will boost tourism,” he said.

With poaching rife in Zimbabwe, the cheetah population in 2016 dropped by 85% with less than 1,000 of the cats remaining. The entire population now lives in protected game parks.