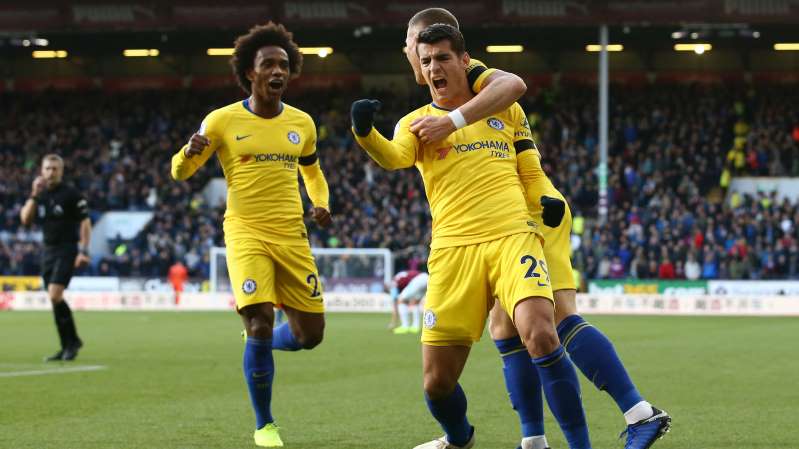 Chelsea maintained their unbeaten start to the Premier League season as Alvaro Morata, Ross Barkley and Willian scored in a 4-0 win over Burnley at Turf Moor on Sunday.

The Blues made light work of Burnley in Eden Hazard’s absence – the Belgian missing with a back problem – as a devastating attacking display saw off the Clarets and moved Maurizio Sarri’s side up to second in the table, two points behind leaders Liverpool.

Barkley’s deft pass in the 22nd minute set Morata up for Chelsea’s opener and the England international scored in his third consecutive Premier League game 12 minutes into the second half to put the game beyond Sean Dyche’s side.

Willian added a third after 62 minutes with a wonderful finish from distance and Ruben Loftus-Cheek scored his fourth in two games as Chelsea cruised to a victory that leaves Burnley languishing in 15th.

Joe Hart had to be alert to deny Chelsea a 12th-minute opener, the Burnley goalkeeper pawing away Morata’s instinctive header from Barkley’s scuffed shot.

Robbie Brady – making his first appearance in 10 months after a knee injury – then flashed wide for the hosts before Willian went agonisingly close to breaking the deadlock, his precise effort coming off Hart’s left-hand post.

There was no such luck for the Clarets in the 22nd minute when Morata slotted into the bottom-left corner after latching onto Barkley’s incisive through ball.

Morata then squandered two golden chances to cement Chelsea’s superiority before the interval, first dragging wide after cutting inside Ben Mee and then firing straight at Hart after being picked out by Jorginho.

The rejuvenated Barkley doubled Chelsea’s advantage in the 57th minute, bursting forward from midfield and drilling into Hart’s bottom-left corner from 25 yards.

That was followed just five minutes later by a third from Willian, who cut in from the left and whipped a fine strike past Hart for his second league goal of the campaign.

Fresh from his hat-trick against BATE in the Europa League on Thursday, Loftus-Cheek slammed home a fourth from close range in stoppage time as Chelsea sent out an ominous statement about their title intentions.

Victory over Burnley means that Sarri is the first Chelsea manager to remain unbeaten in his first 10 Premier League games in charge. The former Napoli man has wasted little time in stamping his style on the Blues, who look like genuine title contenders. Burnley, meanwhile, remain three points above the relegation zone and look well short of the side that secured a remarkable seventh-placed finish last season.