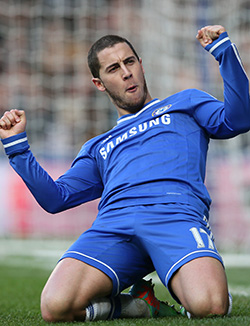 EDEN Hazard has revealed he is in talks with Chelsea over a new contract, easing fans’ fears he could be tempted to join French champions Paris St Germain.
The Belgian winger scored 17 goals for the Blues last season and has been persistently linked with a big-money move to Paris over recent weeks.
But days after learning he had been handed the number 10 shirt – vacated by Juan Mata in January – at Stamford Bridge, the 23-year-old insists he is going nowhere.
Speaking to Belgian newspaper Le Derniere Heure, he said: “I am staying at Chelsea 100 per cent.
“Of course in football you never know but I am under contract with Chelsea and I want to stay there. And I am in discussions with Chelsea for a new contract.
“It is only the beginning of the talks right now so we have time, but the fact that Chelsea have offered me a new deal means they have a lot of confidence in me that I can do a good job and that they can count on me.
“PSG never made any suggestions to me personally.”
Hazard, who is currently in Brazil preparing to represent Belgium at the World Cup finals, signed for Chelsea for a reported £32 million fee in June 2012.Advertisement