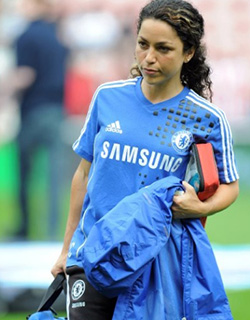 CHELSEA are planning a medical staff reshuffle, just days after first-team doctor Eva Carneiro was publicly criticised by Jose Mourinho.
The Chelsea manager expressed his disappointment with the decision of Carneiro and physiotherapist Jon Hearn to rush onto the pitch to attend to Eden Hazard during Saturday’s 2-2 draw with Swansea.
As per the regulations, Hazard was forced to come to the sideline before returning to action, leaving Chelsea temporarily down to nine men following the dismissal of goalkeeper Thibaut Courtois.
After the game, Mourinho blamed his medical staff and The Telegraph now say that Carneiro will be axed from her match-day role.
“I wasn’t happy with my medical staff because even if you are a medical doctor or secretary on the bench, you have to understand the game,” Mourinho said on Saturday.
“My medical department left me with eight fit outfield players in a counter-attack after a set piece and we were worried we didn’t have enough players left.”
The newspaper say Carneiro, who has been with the club for five years, will still remain in the position of first-team doctor but will only carry out work on players at the training ground as oppose to during and after games.
There has been widespread support for Carneiro, who took to Facebook to thank the public for their response to the incident.Advertisement