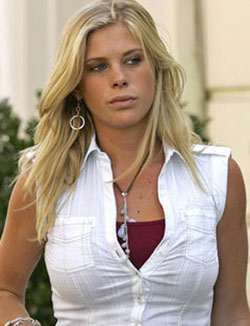 PRINCE Harry‘s ex-girlfriend, Chelsy Davy, is on the verge of getting engaged.
28-year-old Davy — who the British royal dated on and off for six years — is dating jeweller Charles Goode, 30.
The couple have been on holiday together in Bodrum, Turkey, and Chelsy has visited his mother’s home in the Devon seaside resort of Torquay.
Chelsy, the Zimbabwe-born daughter of a wealthy South African safari farmer, split up with Harry for the time in 2010 after a tempestuous relationship. They got back together a few times — in 2011 and 2012.
She was later reported to have told friends: ‘There’s no way we are getting married. It’s not a life for me.’
Charles, a third-generation jeweller at Goode & Son, took Chelsy to meet his 52-year-old mother, Jackie, who runs Hennessy restaurant and cocktail lounge in Torquay.
Chelsy and Harry apparently split in 2011 after she was annoyed by Harry’s flirtatious behaviour with sister-in-law Pippa Middleton.
“[Chelsy] saw the way that he was flirting with Pippa Middleton at the royal wedding, and it’s only natural that she felt pangs of jealousy,” a source said.
“Harry will never be the faithful type. Chelsy doesn’t want to live her life in a fishbowl.
“Even if Harry were to propose she’d say no. She doesn’t want to be a princess … [Kate Middleton] knows how to play the game, and she says all the right things. Chelsy is more of a free spirit.
“Harry knows that with his looks, charm and title, he can have practically any woman he wants, so he figures, why not play the field?
“He wants to go to L.A. with Wills and Kate in July…He wants to conquer all of the leading ladies in Hollywood!”Advertisement