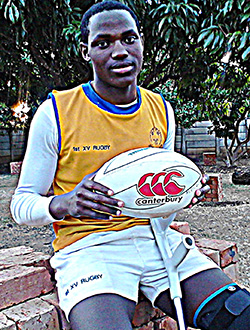 WITH a frame that must have taken his creator several months to assemble, Chemist Manduku is the archetypical example of precision in the ‘assembly yard’ of God’s man making plant.
And yet one would think this human colossus is as old as his frame is imposing and scary; yet he is only 18-years-old and a new gem that the scouts have unearthed in the search for the next best thing in the world of Zimbabwean rugby.
And what he is the direct opposite of what his looks suggest.
Beneath this imposing afro and the Muhammad Ali look is a gentle giant whose passion, apart from God and school, is purely rugby.
And he can talk rugby from start to finish in a monotonous excitable fashion that can border on being nauseating even. But that won’t stop him.
“I love rugby and I live and breathe rugby. I can talk about rugby on and on because it is something I am very passionate about,” he says unashamedly. Even he knows his blabbering on and on about rugby can be a tad too much.
But if his talking is too much, watch him on the field of play where he has raised eyebrows amongst the biggest and best of scouting schools as well as individuals from across the Limpopo in rugby-mad South Africa as well.
After the Dairiboard Rugby Schools Festival (formerly known as Cottco), Chemist Manduku has been the talk of all rugby enthusiasts with an eye of putting together the team of tomorrow.
And even the Sharks are rumoured to be having their eye on this Ellis Robbins lower six rough diamond who just might be the next legend in the unfolding story of Zimbabwean rugby.
While he has to be defensive as a full back, so forceful he is that he is also feared as an offensive sort of player.
He was voted the man of the match early on into Dairiboard and featured in many daily newspapers as he left the media and attendees in awe.
It is also probably his Hulk-like transformation that makes him an amazing player. While he is a gentle giant, just toss him onto the field and he turns green like an enraged incredible Hulk and you will never be able to view him the same again.
“That tenacity has had many people say they want to sin him on. Many schools want to wean him off Ellis Robbins and they want him in their school line ups but we are biding our time. We want to make an informed decision,” says his brother and manager Oscar Habeenzu.Advertisement

These are probably early days yet for the young man, who has already gone on to be selected for the President’s 15 Team under the Rugby Development Programme by the Zimbabwe Rugby Union.
He could have been enjoying the spring sun in the japtropha and maize farm that his father runs in Zambia. Yet he is setting his sights on becoming the next biggest name in national rugby as he weaves his way to the apex of rugby playing in the nation.
The junior league, which he has cracked with such tenacity, is in fact too small for the young man; and his frame says it all!