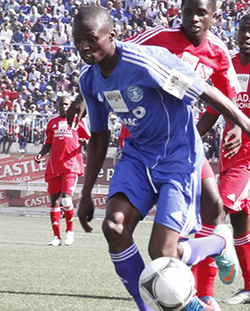 HARARE City believe the Chibuku Super Cup final against giants Dynamos at the National Sports Stadium on Saturday is a crucial game hence they have enlisted the services of psychologist ahead of the showdown.
City secretary Mathew Marara, speaking at a joint press conference in Harare on Thursday, said: “This match is more of a psychological game than anything else.
“We have enlisted the services of a psychologist in preparation for this match.”
While developments at Luveve on Wednesday seemingly confirmed the end of Dynamos’ interests in the championship race, with only the Chibuku Super Cup to fight for, the Dynamos leadership and team captain Ocean Mushure believe they can still win both trophies.
Both the league title and Chibuku Super Cup come with tickets to participate in the African Safari.
Dynamos will earn a place in the prestigious African Champions League if they win the league title while lifting the Chibuku Super Cup will give them a ticket to the Caf Confederation Cup.
Mushure, speaking to reporters during a news conference in Harare, said Dynamos had a good record in cup finals and were targeting nothing short of victory.
He also revealed they had the backing of the club hierarchy with officials coming to their training sessions to give them morale support.
“We have got a good record in cup finals where we rarely lose and even the club leadership is coming to our training sessions to give us morale support,” he said.
“So, I think we are going to win this match against Harare City. Even in the league there are still 12 points to fight for so we are still in the race.”
Harare City captain, David Kutyauripo, whose troops reached the final last year only to be beaten to the trophy by FC Platinum in controversial circumstances, said they have let bygones be bygones.
“I think that goal scored by FC Platinum which stood was from my personal opinion not a goal,” said the former Dynamos player.
“But we want to let bygones be bygones, this is a different game altogether. It’s a great honour for us to be back in the final. Dynamos are a big team with a huge following and Harare City is a brand.
“We will try to get a goal every minute to try and unsettle them. We know if we score the crowd can turn against them. It’s going to be one of the best cup final in history against Dynamos.”Advertisement