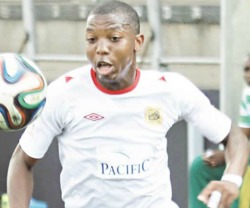 Chicken Inn are angling for the signature of former FC Platinum striker Brian Muzondiwa.
The 2015 Soccer Star of the Year finalist was released by FC Platinum after struggling to hold down a first team shirt last term.
Muzondiwa’s handler Gibson Mahachi confirmed Chicken Inn had expressed interest in the player.
This came as reports also suggested Harare giants Dynamos and Caps United were also keen on the player.
Mahachi, however, said he was in talks with Chicken Inn although a decision would be made by the end of the week.
There was interest from the three clubs but said a decision would only be made today.
“Yes there is interest from Chicken Inn. They have formally approached us. Some are just inquiries but we will be able to announce the position sometime this week,’ Mahachi said at the weekend.
Unconfirmed reports also suggested Muzondiwa was in Harare on Saturday for talks with Caps United.
Repeated efforts to get comment from Caps United chief executive Cuthbert Chitma were fruitless.
Caps United have been hit by a player exodus over the last six months, losing no less than six key players, which has cast doubts on their chances of winning the championship next season.
Those that have since left Caps are Ronald Chitiyo and Abbas Amidu who joined Tunisian and Egyptian clubs respectively while Ronald Pfumbidzai joined a South African club. Last week, Dominic Chungwa and goalkeeper Edmore Sibanda completed their moves to Polokwane City Witbank Spurs respectively.
Caps United coach Lloyd Chitembwe has been assessing a number of foreign players including some from Ghana and Zambia in the past season, with a view to signing them. Some of the players are expected to come for final assessment as the club starts pre-season preparations.Advertisement