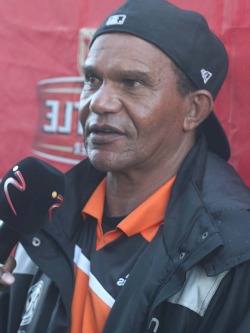 Triangle 1-1 Chicken Inn
HOSTS Triangle needed second half penalty from Ronald Mudimu to level scores after Tendai Mukambi gave Chicken Inn the lead in the Castle Lager Premier Soccer League at Gibbo on Sunday.
Mukambi scored in the 29th minute to give the visitors the lead after receiving a pass from George Majika in the box.
Triangle got the first opportunity to open the scores the in the 15th minute when Chicken Inn captain Brian Mbiriri handled Praise Tonha’s cross inside the box.
Triangle based referee Jimmy Makwanda did not hesitate to point to the spot and Tineyi Chitora stepped, up only to see his spot kick superbly saved by Liberty Chirava.
The Lowveld side were forced to make a first half substitution in the 40th min, replacing Blessing Chimwamuchere with Ronald Maketo after the former was injured.
Zuze’s team’s search for an equaliser was inspired by Nhamo Lameck whose shot was blocked and fell into the path of Pasca Manhanga whose goal bound shot was handled by Moses Jackson to earn Triangle another penalty.
Triangle goalkeeper Mudimu took the matter into his own hands after Chitora had missed the first time and Mudimu sent Chirava the wrong side to level the scores just after the hour mark.
Chirava was booked by Makwanda for time wasting in the 72nd minute as Chicken Inn looked content with a point while Triangle kept on pushing for three points.
Mukambi almost doubled his tally and win it for his team when his shot went just wide after a counter attack in the 74th minute.
Chicken Inn head coach Joey Antipas said he was happy with the overall performance of his side.
“We put up a good solid performance and we are happy to pick a point away from home but unfortunately we could not collect maximum points”.
“We had an early lead but we conceded a soft goal when the defence didn’t clear their lines well and conceding an unnecessary penalty which resulted in a goal,” said Antipas.
Zuze was also happy with the performance of his youthful midfielders Brian Juwayeyi and Tichaona Chipunza who neutralised Clement Matawu and Bhekimpilo Ncube in the middle of the park.
“We missed Charles Rukwanhi and Courage Denias through suspension and injury respectively but the youngsters did extremely well,” he said.Advertisement