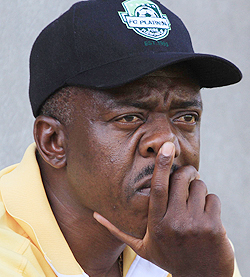 HIGHLANDERS continued to play second fiddle to city rivals Chicken Inn as they suffered their second defeat of the season at the hands of their neighbours on Africa Day.
Chicken Inn skipper, Moses Jackson, scored with a header past goal keeper Ariel Sibanda with a minute before full time to secure victory for the former champions.
That was the only goal of the match.
Bosso rivals dedicated that win to defender Teenage Hadebe who was withdrawn a few hours before the match after his mother collapsed and died.
Dedicating the win the Hadebe, coach, Rahman Gumbo, said the victory came at a good time after losing four matches in Bulawayo with the only win against Bantu Rovers.
Highlanders coach, Elroy Akbay, was not disappointed with the result saying it was their second defeat but his charges had played well only to lose concentration at the end.
In other matches played on Thursday, Yadah beat Triangle 3-0 while ZPC Kariba and Chapungu drew 0-0. Shabanie Mine beat Bantu Rovers 4-1.
Advertisement