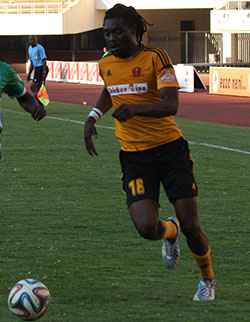 Chicken Inn 2-0 Chapungu
Flame Lily 0-1 Caps United
FOR now, there is no stopping Chicken Inn.
On Saturday, the Bulawayo side banged two past Chapungu at Luveve to take their points tally to 37 and remain top of the league.
Star striker Mitchelle Katsvairo struck after 33 minutes and veteran midfielder Bheki Ncube made sure of the points on the hour with the second.
The win was with the intention of losing track of second placed Triangle.
But Kelvin Kaindu’s would not be shaken off that easily. They travelled to White City in the City of Kings and claimed three points from hosts Tsholotsho.
That fruitful trip from the Lowveld was assured through a double strike by Tawanda Munyendi in the second and 23rd minutes of the match as they stayed on 35 points.
Elsewhere, after a threat from club owner Farai Jere, Caps United just had to get maximum points from Flame Lily at Larfarge.
But, were they convincing?
Definitely not, for after 90 minutes the scores were still tied at nil all and the correctional services side looked set to walk away with a point.
But three minutes of added time is what Caps needed to claim all three when Dominic Chungwa struck right at the dearth to give the Green Machine some breathing space.
At Mandava, FC Platinum are having things really going for them.
Welcoming Hwange, Platinum romped to a sweet 2-0 win that took them to 28 points.
Brian Muzondiwa, who is really proving to be their best buy of the season, opened the scoring in the 47th minute before Winston Mhango converted from the penalty spot five minutes after the hour mark.
At Rufaro, Harare City are limping. They could not breach the defence of lowly Dongo Sawmill and had to settle for a scoreless draw.
RESULTS & FIXTURES
Saturday: Harare City 0-0 Dongo Sawmill (Rufaro), Chicken Inn 2-0 Chapungu (Luveve), FC Platinum 2-0 Hwange (Mandava), Tsholotsho 0-2 Triangle (White City), Flame Lily 0-1 Caps United (Larfarge)
Sunday: Dynamos vs ZPC (Rufaro), How Mine vs Highlanders (Barbourfields), Whawha vs Buffaloes (Ascot)