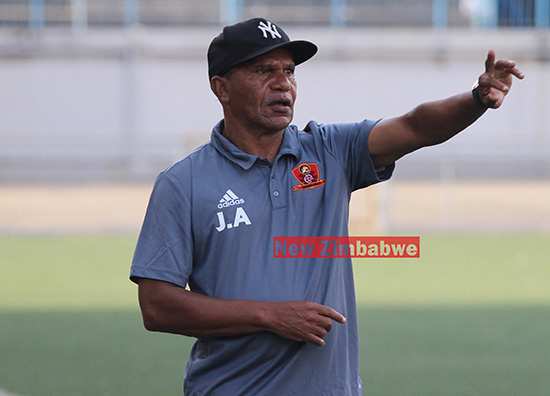 CHICKEN Inn coach Joey Antipas believes his team can do what only a handful of teams have done before them and stop Mamelodi Sundown’s forward line of Leonardo Castro, Khama Billiat, Keagan Dolly – dubbed the “Pretoria CBD.”
The Brazilians trio will carry the hopes of Pitso Mosimane’s team on Saturday when Sundowns confront the Zimbabwean champions in a CAF Champions League preliminary round match at the 10 000-seater Luveve Stadium in Bulawayo.
Antipas is aware of the threat that Sundowns forwards would pose in the match, but said their strategy is to shut down their supply without necessarily parking the bus.
“Those guys are good ball players and they have a good supply line,” Antipas told a local daily ahead of the clash.
“What we have to try and do is cut out the supply line because I believe if we cut out the supply line those three [Castro, Billiat and Keagan Dolly] are not really ball winners or hard workers, they thrive on good supply, we can then try and cut out the supply line, it would be good for us,” said Antipas of the trio dubbed CBD, Castro, Billiat and Dolly.
The Absa Premiership log leaders have been ruling the roost in the domestic front and are unbeaten in 15 Premier Soccer League matches. They are on a six-match winning streak and will pose a huge threat for the Chicken Inn.
Billiat and Castro were again on the score sheet for the Brazilians beat Soweto giants Orlando Pirates 2-1 in Orlando on Wednesday night for their sixth win in succession.
The Gamecocks, who convincingly won the Zimbabwe PSL title, are in their off-season and have not played competitive football since December when they lost a Cup final to Highlanders.
However, they are in the middle of the pre-season preparations and have participated in a in a tournament in Zambia to aid their match fitness levels.
With Sundowns firing on all cylinders, Antipas said his team will approach the match with a lot of caution.
“It being our first match we have to go out there and play a cautious game,” Antipas said, adding that he has no injury concerns ahead of the tie.
“We cannot go out and charge at them like Red Indians. We got to play it cautious because if we go out there and take them head-on, Sundowns are a very brilliant side they are going to expose us.
“I’m not saying we are going out there to park the bus, but we are going out there with a cautious approach,” said the former Motor Action coach.Advertisement