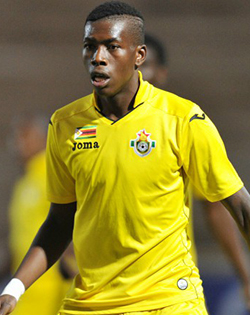 The Warriors defender has been linked with Amakhosi, who are expected to bolster their defence prior to the 2017/18 campaign

SOUTH African Premier Soccer League (PSL) giants Kaizer Chiefs have reportedly renewed their interest in Zimbabwe international Teenage Hadebe.
The 21-year-old defender is believed to have underwent a successful trial stint with the Soweto giants at the beginning of the current season.
However, Chiefs could not sign the player because his Zimbabwean club Chicken Inn failed to reach an agreement with Amakhosi.
This was confirmed by the Zimbabwe Premier Soccer League (ZPSL) club chairman Lifa Ncube, who explained that  the two teams couldn’t agree terms on certain things at the time.
The towering player was named in the Zimbabwe squad ahead of 2017 Africa Cup of Nations (Afcon) finals in Gabon, but he did not play for the Warriors.
Nevertheless, Amakhosi are said to be preparing a move for Hadebe ahead of the upcoming Transfer Window period.
The promising defender remains a key player for the Gamecocks, who beat Triangle United 1-0 in a ZPSL match last weekend.
Chiefs signed winger Edmore Chirambadare and striker Mitchell Katsvairo from Chicken Inn prior to the current campaign.Advertisement