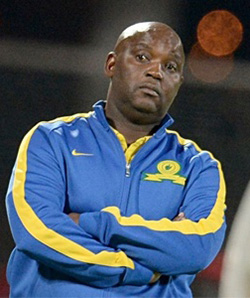 MAMELODI Sundowns coach Pitso Mosimane said there was no need to reinforce the team ahead of the CAF Champions League opener against Chicken Inn, although he admits that the two matches will be tough.
The two teams clash in the preliminary round on the weekend of February 12-14 at Barbourfields Stadium with the second leg two week later in Pretoria.
Mosimane, in a general interview with the media, said he had only signed three players, Fiston Abdoul Razak, Soumahoro Bangaly, and Columbian Leonardo Castro, while Mogakolodi Ngele and Keagan Dolly had been signed in January and loaned back to Platinum Stars and Ajax Cape
Town respectively.
Sundowns are home to Zimbabwean stars Khama Billiat and Cuthbert Malajila while Kuda Mahachi has been loaned to Golden Arrows, also in the Absa Premiership.
“We have been drawn against a very good side,” Mosimane said.
“In fact, I think our draw is tougher than (Kaizer) Chiefs. Chicken Inn is not an easy team.”
Mosimane pointed to the team’s success record – ending the reign of Dynamos who had won the league the previous four seasons.
“They are a young team, and we signed Kuda Mahachi from them,” he said.
“We are doing our homework, but we also have held our pre-season camps in Zimbabwe the past two years, and we are quite familiar with the environment and the stadium, which is more like Orlen Park, the stadium Jomo Cosmos use in Potchefstroom.”
Chicken Inn sign new players
While the match against Chicken Inn has been set for Barbourfields, it can still be played at Luveve Stadium – Chicken Inn’s home ground, since it meets Caf standards following renovations in 2014 for the Region Five Youth Games.
Although Sundowns have not signed any players, Chicken Inn have been busy on the transfer market, bringing in two former Highlanders players in striker Obadiah Tarumbwa and defender Teenage Hadebe.
They have also brought in Moses Demera from relegated Flame Lily and Physwell Madhazi from another relegated side Buffaloes.
They have maintained the core of their squad led by skipper Danny Phiri, veteran striker Clemence Matawu, Passmore Bernard, Devine Lunga, Edmore Chirambadare, Mitchelle Katsvairo, goalkeeper Elvis Chipezeze and the ageless Bheki Ncube.Advertisement