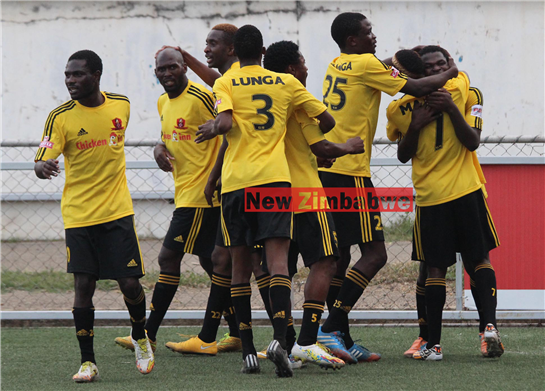 CHICKEN Inn are yet to decide their participation in the 2016 Caf Champions League after winning the Castle Lager Premiership title on Saturday.
The deadline for registration is November 30.
While the club’s leadership hinted on Saturday that they will take part, there were indications on Tuesday that FC Platinum could step in to replace them.
Harare City, the winners of the Chibuku Super Cup, have confirmed they will represent Zimbabwe in the Confederation Cup next year.
Sources told New Zimbabwe on Tuesday that the focus of the club leadership was on investing in a club house, team bus and having a strong junior policy before they can venture into Africa.
“That route (Champions League) is expensive for a club that does not yet have its own investments.
“FC Platinum have already invested and have the capacity to fund their travels across Africa,” said a source.
Chicken Inn club secretary, Tawengwa Hara, said they were waiting for the go ahead from their sponsors, Innscor Africa.
FC Platinum, founded by Mimosa Mining Company in 1995, are now owned by FC Platinum Holdings, a diversified group which has interests in entertainment and hospitality in Zvishavane and a state of the art stadium Mandava. They are planning to list on the Zimbabwe Stock Exchange (ZSE) soon.
Besides FC Platinum, the only other club with properties is Highlanders, who have town offices in Bulawayo, a sports club with pitches for various sporting disciplines and a sports bar on the outskirts of the city along the Victoria Falls road, a camping house in the high density suburb of Luveve.
Bosso are also renting another bar from the Bulawayo City Council.  They also received a bus from Nyaradzo Funeral Services last month and bought another one from the proceeds of their participation in the Bob Super Cup last year and a mini-bus.
Recently, newly promoted Bulawayo City hinted that they need to acquire properties for their new side, including a club house and a team bus for their travels across the country as a way of being self-sustainable.
The problem with most clubs in Zimbabwe is that they have failed to understand the import of the Caf Club Licensing, which requires them to run as profitable businesses.
Most of them engage in sport as part of corporate social responsibility and not as a way of creating employment.Advertisement

The basic template of the club licensing rules include having a full manned office, run by a general manager, a public relations officer, media, doctor and a junior policy that allows a club to take part in Caf inter-club competitions.