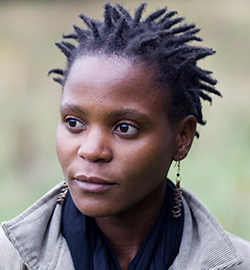 Orphaned at the age of seven, Chido Govera escaped a life of poverty and abuse in rural Zimbabwe. Now she’s an activist, travelling the world to help others change their lives.
WHEN she was 10 years old, Chido Govera was offered a way out. A relative walked many miles to see her and said: “You know, I see that you’re suffering and I would like to help you. The only way I can help you is my husband has a friend and he’s around 40, he’s been struggling to find someone to marry and he thinks if you marry him, it would be a chance of escaping all this poverty and abuse. So you should come and meet him next Wednesday.
Other girls in Govera’s position in rural Zimbabwe might have acquiesced. She never knew her father and lost her mother to Aids when she was seven. She was left to care for her grandmother, who was virtually blind, and her five-year-old brother. She would often wake up at 4am, search for firewood, walk at least a mile to fetch water, work in a field, attend school and go to bed hungry. She was also physically abused by members of her extended family.
When it all became too much, aged nine, she dropped out of school, abandoning her mother’s dream for her of boarding school and studying in America.
“It was tough,” she recalls. “I remember I cried many days after that and I used to watch other kids going to school that I used to run around with, and it was painful. But it was more painful to go to school and spend the whole time thinking about what’s going to happen when I get home. Getting back home to watch the hungry faces of my granny and little brother. It was unbearable.”
So when next Wednesday came, the young girl with few prospects was expected to meet the man 30 years her senior who would become her husband and provider. “The reason why I was supposed to find it attractive to marry him was because he had two sisters that were going to South Africa to buy clothing and coming back to Zimbabwe.”
She chose a different path: “I did not go because I realised if I got married, then I was leaving my grandmother and my little brother alone and I wouldn’t be able to help them any more.
“When I was eight years old I’d told myself, ‘I want to help other young orphans so they do not have to experience what I was experiencing.’ I thought, ‘If I get married, am I achieving that or not?’ And it was clear that was not the way to go. I didn’t go to meet the guy and my relative told me, ‘I tried to help you, you turned that down and from now on you’re pretty much on your own.'”Advertisement

One-woman revolution
Today things look very different for Chido Govera. At 28 she is a successful farmer, campaigner and educator with her own foundation, The Future of Hope. She has trained nearly 1,000 people in communities in Zimbabwe, the Democratic Republic of the Congo, Ghana, Cameroon, Tanzania and South Africa. Her work has reached schools and communities in India, Aboriginals in Australia and entrepreneurs in the US and around Europe. The key to this one-woman revolution is mushrooms.
A year after turning down the stranger’s marriage proposal, Govera was among 15 orphan girls in Zimbabwe invited to receive training in mushroom cultivation, supported by the Belgian environmental entrepreneur Gunter Pauli. She had been accustomed to harvesting mushrooms in the bush but this was different: “My grandmother was so knowledgeable that even when she couldn’t see any more she could smell which mushrooms were edible, inedible, poisonous … But to grow them was very strange.”
The group received bags of waste mixed with spores and learned how to manage a mushroom house. In less than a week, mushrooms were growing. When Govera took her first taste of one, it came as a shock. “They were completely different from mushrooms gathered from the forest,” she laughs. “It was a bit like eating a snail. It had sliminess to it and the crunchiness of a snail.”
Soon the group was producing enough to sell, earning money to buy food and pay for the school fees of orphans including Govera’s brother.
“You realise that if you can work, you can actually get there step by step, you can put food on your plate,” Govera says. “In this case it was converting waste into food, creating food for the community, but also doing something that no one else in that community was doing. We were unique in that time, doing something that was highly scientific without having studied at all. In my case I’d only done five years of primary-level education. It was like magic.”

The girls’ success made them attractive marriage material and of the 15 taking part, 13 quickly fulfilled society’s expectations by finding husbands.
Again, Govera did not. Instead, from the age of 12 to 16, she was to be found in a university laboratory taking advanced studies in what she describes as both the art and science of mushroom cultivation. She continued to hone her expertise during spells in Colombia, Serbia and China.
And in Pauli, she discovered the father figure that had always been missing in her life, most notably when she was being abused and had no one to turn to. “One of my biggest dreams, of course, never having met my father, was to actually have a father.
“The lady who was teaching us in the laboratory sent a message to Gunter Pauli saying, ‘You know what Gunter, we have a girl who’s got green fingers, mushroom fingers, and unlike the others she doesn’t want to get married.’ Then he says, ‘Well, what does she want?’ He was told she needs a father and that’s how he became my daddy.”
Possibility for change
As Govera travels the developing world teaching mushroom farming to women and orphans, she is also pioneering new techniques, for example growing mushrooms from coffee grounds for commercial use.
Otherwise she divides her time principally between South Africa and Zimbabwe, a country many still associate with 90-year-old president Robert Mugabe’s authoritarian regime and its ruinous economic policies. “I don’t think I would be doing what I’m doing now in Zimbabwe if I didn’t believe there is a possibility for a change,” she says.
“I strongly believe that, regardless of what is happening in politics – not just in Zimbabwe but in many different parts of the world – if we want to change things, we will need to go to the grassroots and teach them to stand up for themselves, because if we can empower them beyond being a victim of a political situation, then we are making change happen.
“The reason why I go into communities, select groups of young orphans, empower those and bring them back into the communities to inspire change there is because we need to change the way change is viewed. People say politicians or the grownups or the successful ones are going to change things in the country, but I think everyone has a part to contribute.”
Zimbabwe’s politicians are sometimes accused of being imprisoned in the past. This is not something Govera herself could be accused of as she looks back on that 10-year-old who, one Wednesday, decided to take the road less travelled.
“I learned to redefine myself regardless of what happened to me when I was a kid,” she reflects. “I’ve been able to reclaim myself. This is something that’s required for every individual. We are not what happened to us.
“From those experiences there’s some kind of lesson that inspires me to do what I do now, but I’m not back in the moment when I was 10. I’ve dealt with that. I just look at the future with a new hope. I’m 100 percent sure that I am not going to be one of those women who say, ‘Things are the way they are because I grew up as an orphan.'”
Chido Govera will be at Observer Ideas – A Festival for the Mind on 12 October at the Barbican, London EC2. For tickets and information, visit observer.co.uk/observer-ideas.

This article was originally published by the UK-based Observer newspaper.