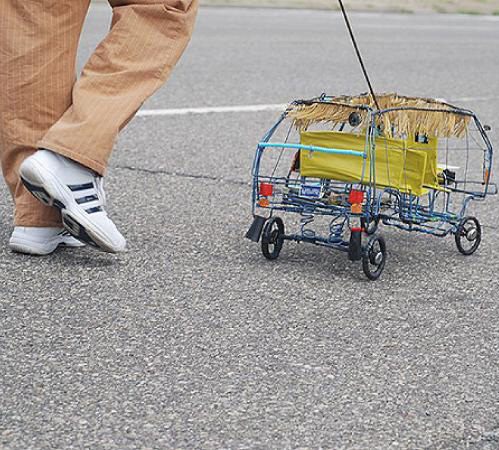 WHILE growing up in Africa, Chido Johnson learned about the tradition of creating toys out of whatever materials were available. A favourite toy of Johnson’s was functional toy cars, created almost entirely out of discarded wire.
As fate would have it, Johnson wound up moving to the Detroit to teach sculpture, and the romantic notion of bringing a folk art tradition based on cars from the other side of the world to the Motor City was not lost on him.
With his group the WAWAD (the Wire-Car Auto Workers Association of Detroit), Johnson hosts workshops where he teaches people how to make their own wire-cars, and stages cruises where artists can show off their creations. Metro Times spoke with Johnson to learn more.
Metro Times: Tell us about growing up in Africa.
Chido Johnson: I was born in Zimbabwe, and raised there. I lived six years in Zambia as well. My father was an artist too, and he got exiled when he was involved in the revolution for Zimbabwe. So he got exiled to Zambia. As a kid, in Zambia, that’s where I learned how to make wire-cars. They make wire-cars out in Zimbabwe, but technically I learned it when I was living in Zambia.
MT: Were there cars in Zimbabwe and Zambia? What kind of cars?
Johnson: Yes. Not as much, especially growing up in a rural area, but there were cars. When I was younger, American cars used to come there. I think in the ’50s there were USA cars. I remember we had a word called “muzvambarara,” which meant “long car,” like a big car. And those were the American cars. They didn’t last because they couldn’t handle the dust.
In Zambia, it was a time — this was in the late ’70s and early ’80s — it was economically struggling. There were definitely no toys. So the older kids would make wire-cars. I made a wire-car when I was a kid, but it was horrible! But people made amazing wire-cars. So I remembered that.
I remember growing up in that time, it was hard economically, but people made things last. You’d be amazed. You’d see a radio that was barely put together because you can’t find parts. That’s the kind of connection I felt here in Detroit as well. It’s a lot of ingenuity — it’s not the quick fix. It’s not like, “What’s that piece I need?” It’s more like, “How can I make this work?”Advertisement

There’s also the idea of having that cultural practice here in the USA. There’s more of a consumer culture — this is very anti-consumer. It’s more about stopping and spending time, which we don’t usually have that time, and stopping and looking at the floor and finding a weird bottle cap that makes you think of a hood ornament or hubcaps or something.

MT: How did you start the WAWAD?
Johnson: In 2009, I made a pink Cadillac — a 1967 Cadillac. I just made this car to film myself and made a video piece from Jefferson all the way to Eight Mile on Woodward. I lived in Detroit for seven years without a car. So that was actually my first car! But after I did that piece, I was like, “It would be so sweet to have a whole group of us” — a cruise. So that’s what triggered it. In 2011, I was one of the early Kresge arts fellow. I was thinking about something based on region and community because that was the first time I felt connected to a city. It made me start reflecting who my community was and what it meant.
I wound up doing workshops around Detroit focused on different communities. At the same time, I took over the old dealership on Cass Avenue and turned it into a parking lot. I had the city close one lane of Woodward Avenue in front of the DIA and we cruised. About 80 people showed up.
The piece I did for the DIA was called the “Dance for Diego,” and it was kind of reflective of the Diego Rivera mural. Imagine long ago, when people stood on Woodward Avenue and they saw that first assembly line. I mean, you knew that blew people away. You know, like, “What do I do with my donkey?” So that potentially triggered a whole cultural phenomenon, almost like a butterfly effect. And that triggered making wire-cars across the ocean. To bring that tradition back to the road, to the space that once triggered it, that’s what the poetics of that piece were about.
MT: Rivera’s have been referred to as a “secular Sistine chapel.” And you could look at toy cars as a global cargo cult.
Johnson: I was doing a workshop in Dearborn, and the youth are from Yemen. They told me they grew up with wire-cars in Yemen too. And when I did a workshop in Germany, somebody showed me a photo of some kids with wire-cars in Europe too. I know Germany had its own car industry, but in my head I imagine it having been birthed from Detroit. So bringing that practice back here seems very symbolic, and shows the global connectedness. We’re more similar than we are different.