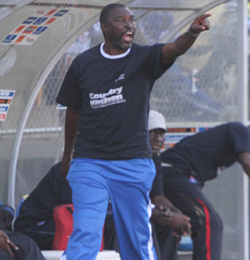 COSAFA Castle Cup winning coach Misheck Chidzambwa has called for “self-belief” if Zimbabwe are to win this year’s regional football title.
Chidzambwa coached Zimbabwe to their first Cosafa crown in 2000 when they outplayed Lesotho 3-0 home and away to register a convincing 6-0 aggregate win.
The Warriors arrive as defending champions at this year’s tournament to be hosted by Zambia from 6-20 July. The tournament returns after a three-year absence and Zimbabwe begins their campaign at the quarter final stage with a date against Malawi on 13 July.
Zimbabwe has appeared in six finals but won four titles since the inception of the tournament in 1997. Now under German-born coach Klaus-Dieter Pagels, Zimbabwe would be out to claim a fifth Cosafa crown and restore the legacy created by Chidzambwa.
“The players need to believe in themselves. Without self-belief, we will be fooling ourselves. When we won the Cosafa trophy in 2000, I was fortunate enough as a coach to have confident players who we ready for any opponent and believed they could do it,” Chidzambwa said.
“This new crop of players should not think about themselves as a new team but as professionals who are out to restore their country’s pride.”
In international friendlies against regional opponents this year, both played away, Zimbabwe lost 2-0 to Zambia in April, before drawing 1-1 with Malawi.
Pagels’ squad for Zambia includes rookie strikers Lot Chiwunga and Chichen Inn’s Tendai Ndoro who currently leads the Castle Lager Premier Soccer goal-scoring charts with ten goals.Advertisement