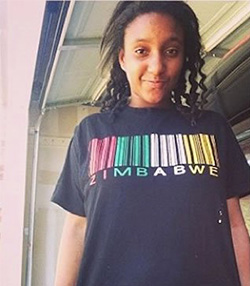 CHIEDZA Brown, daughter of the late legendary guitarist, Andy Brown, will likely be cremated in the United States, a family source indicated Tuesday.
The revelation came at a time local musicians and other artists staged a show at Alliance Francaise in the capital to fund raise for the repatriation of Chiedza’s body from the US.
Surviving sister to Andy Brown and aunt to the late Chiedza, Sandra Mashiringo aka Queen Mashie, hinted at the cremation plan in a brief interview with Newzimbabwe.com.
“She (Chiedza) will be cremated in the US and we will bring her ashes for decent burial in Mberengwa,” said Mashiringo.
While other family members were not forthcoming on the funeral arrangements, Chiedza’s young sister Chengeto’s posts on Facebook indicated the family had already started the cremation process.
A post Saturday on Chengeto’s Facebook wall read: “Tomorrow I begin my journey of accepting you are now with mom and dad.
“It is the hardest, most painful pill to swallow. Chiedza my love, if only you knew how much of me you took with you.”
Chiedza, a blossoming musician aged just 15, allegedly committed suicide a fortnight ago in the US where she was living with aunt, Tawona Maraire.
Her death comes barely three years following the passing of mother and celebrated mucisian, Chiwoniso Maraire in July 2013 while her dad, Andy, died a year earlier.
The family has not confirmed that Chiedza took her own life, but half-sister Ammara, also a singer, appeared to suggest the teenager committed suicide.
“My sister Shahla banged on my door at 3 am wailing, last Sunday telling me my little sister Chiedza (15) had taken her own life,” Ammara wrote.
“After a few seconds of gut wrenching shock, there was an inexplicable pain in my womb, and I soon went into a painful state of hysteria, uncontrollable cries … I could not utter a single word for hours and hours.”Advertisement