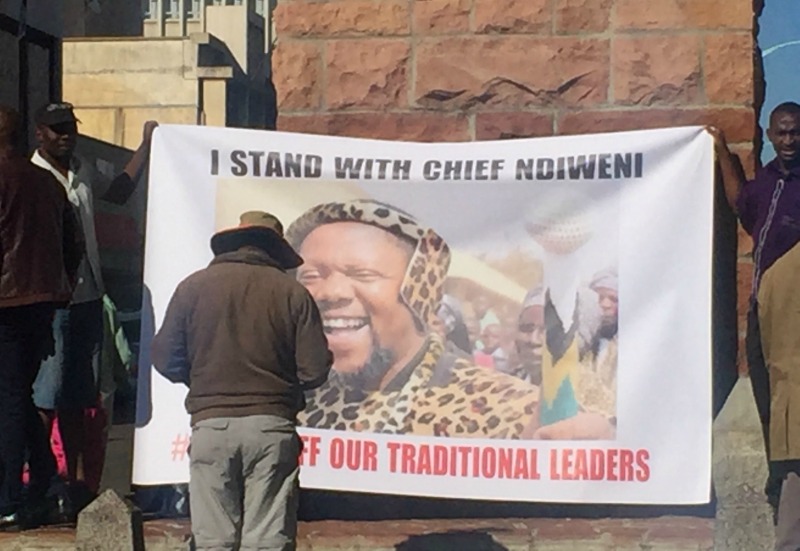 Chief Ndiweni torched a storm recently when he said the West and the US should maintain their sanctions on Zimbabwe.

He said the embargo was befitting of a Zanu PF led regime that remains unaccountable, and for that, subjecting poor citizens to abject penury.

His comments invited both verbal and physical attacks by Zanu PF with war veterans secretary general Victor Matemadanda going all out to attack the chief.

The outspoken chief was also subjected to physical abuse by some suspected Zanu PF youths in the city centre of Bulawayo on Wednesday.

But as Zanu PF takes a hostile stance towards the Ndebele chief, residents in the city have stood firmly behind him.

A group of residents gathered around Nkomo’s statue, singing for close to an hour while police in riot gear and some members of the public looked on.

One of the organisers of the event, Josphat Ngulube said they failed to march in the streets as had originally planned because they felt the march was going to be hijacked for other reasons.

“The purpose of today’s intended march was to show support to our chief who is being victimised by Zanu PF. As people of Bulawayo, we are 100 percent behind our chief,” he said.

Ngulube, who contested last year’s parliamentary elections in Bulawayo South as an independent candidate and lost, said the government should protect and respect chiefs regardless of their tribes.

He also urged the government to desist from the habit of involving traditional leaders in partisan politics.

Last year, the High Court found president of Chiefs Council, Fortune Charumbira in contempt of the national constitution when he publicly pledged traditional leaders’ support for Zanu PF ahead of last July’s elections.

There has been no condemnation by any government officials towards Charumbira.