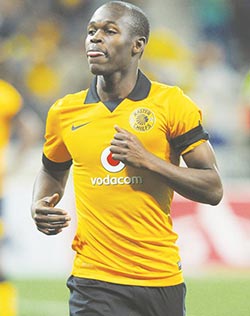 KAIZER Chiefs football manager Bobby Motaung has told Goal that the club is relaxed about Knowledge Musona’s future following a meeting he’s had with TSG Hoffenheim last week.
Musona has made the headlines since the end of last season, with Mamelodi Sundowns reportedly monitoring his situation with AmaKhosi.
However, judging from Motaung’s statement, the Zimbabwe international could well be playing for Chiefs next season, unless there are European offers for him before the start of next season.
“I’m back from Europe (where he had a meeting with Hoffenheim over Musona’s future),” Motaung told Goal. “Tell our fans to relax and enjoy some time off because it’s off-season, because we are also relaxed (about Musona’s future).
“There are no player movements at this stage. The club is closed, but we will make announcements through our website or press conferences when we come back from the holidays,” added Motaung.
The 23-year-old Musona was one of the best players for Chiefs last season, and his desire to go back to Europe pushed him to raise his game following a slow start to his second spell with the Naturena side.Advertisement