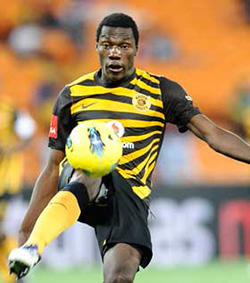 KAIZER Chiefs have finally decided to release Zimbabwean defender Lincoln Zvasiya, who still had a year left on his contract with the Soweto giants.
AmaKhosi had allowed Zvasiya to train with several clubs including Royal Eagles and Cape Town All Stars while still contracted to them.
However, the lanky defender failed to secure a move before the transfer window closed last week Friday, and he was as a result released from his contract.
The 23-year-old Zvasiya is now free to join a team of his choice, although it remains to be seen if he will continue to play his football within the South African borders or he will return to Zimbabwe.
Zvasiya spent the first few months of last season on loan at Greek side OFI Crete, but his contract was terminated soon afterwards and he returned home.
The Soweto giants couldn’t take him back then, as they had already exhausted their foreign quota for the season. He then failed to convince Stuart Baxter and his technical team to give him a chance at Chiefs this season.
Chiefs have registered all their four foreign players this season, and they may tempted to fill the remaining spot when the next Transfer Window opens in January.