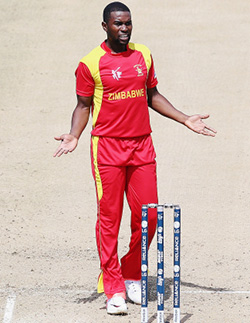 CRICKET skipper Elton Chigumbura has implored his team to improve their bowling at the ‘death’ in their World Cup matches.
Zimbabwe could not withstand the West Indies acceleration of scoring late in their innings as Chris Gayle and Marlon Samuels piled on a one-day record stand of 372 to take the game away from them at Canberra’s Manuka Oval today.
The Zimbabweans were always up against it from there and finished with 289 off 44.3 overs to lose by 73 runs on the Duckworth-Lewis method after a short rain interruption.
Zimbabwe’s bowlers had restricted Gayle and Samuels to 107 for one at the halfway stage but the pair swamped them with 152 runs in the final 10 overs with Gayle hitting a World Cup record 215 and Samuels an unbeaten 133.
The batsmen have posted competitive scores of 277, 286 for six and now 289 in their three pool games at the World Cup for just one victory over the United Arab Emirates.
But it is the bowling that has cost Zimbabwe, especially in the final overs of the innings.
“We have to improve how we are bowling at the death and sooner we do the better for the team and looking at the games we have played it has cost us,” Chigumbura said.
“Chris Gayle is a hard guy to bowl to when he starts hitting, so some of the plans you might try to put them into play but maybe the way we bowled our execution wasn’t right.
“The percentage was maybe 80 out of a 100 on execution. It has cost us and it’s not the first game that we are giving away too many runs at the end.
“We just have to go out and work on our last 15 overs.
“It is a good positive for the team that we are batting well so it’s a matter of polishing up one department which is our death bowling and if we can do that then we hopefully can have a good game with the ball and the bat.”