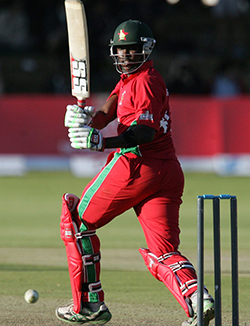 ZIMBABWE’S newly appointed captain, Elton Chigumbura, has cooled fears he may find himself on the side-lines with a quad injury shortly after taking over.
Chigumbura hurt his quad in the first match of his second stint as captain, and battled through most of his 89 minutes at the crease.
“I injured my quad but I think I will be fine,” Chigumbura said. “I just pulled it. I think I will be fine for the next game.”
Chigumbura showed discomfort after facing 17 balls and asked for on-field treatment.
He limped significantly on his left leg thereafter but confirmed the niggle had nothing to do with him not bowling in the match.
Although Zimbabwe’s three seamers included two rookies in Neville Madziva and Luke Jongwe and an off-colour Shingi Masakadza, Chigumbura chose to concentrate on the nuances of captaincy instead of putting more burden on himself.
“I thought the guys bowled well so there was no need for me to bowl,” he said.
“In my first game as a captain there will be a lot of things on my mind so I tried to concentrate on managing the bowlers and the field settings.”
Chigumbura conceded that his attack gave away “20 runs too many,” but was happy with their overall fielding effort.
Zimbabwe dropped Hashim Amla on 62 but did not let any other chances go begging.
What will worry Chigumbura more is that Zimbabwe did not create many chances on an unhelpful surface.
With just a day’s rest between matches, Zimbabwe will look for an immediate solution in terms of being “more strict on the bowlers,” and could even bring some changes to the batting line-up.
Chigumbura was unhappy with the top-order’s failing and asked his men to show more staying power at the crease.
“Wickets in hand is going to be key if we want to win these games so on the batting side, we need to improve on that,” he said.
Zimbabwe only need to look to South Africa for evidence of how that can work. After finding themselves only two wickets down after 80 percent of their innings was complete, the visitors could assert themselves with freedom in the final 10 overs.
“We showed we are quite dangerous in the last 10 overs with wickets in hand,” South Africa captain AB de Villiers said.
“We didn’t have Morne, Dale or Vernon – the old stalwarts so it was nice to see we can win games without them here. It was nice to see Kyle Abbott and Aaron Phangiso bowling well today. So it’s nice to see we have some depth.”Advertisement

Those players have likely earned themselves another match after which South Africa may try new combinations again.
“The most important thing for me is to win games for South Africa. We will try and get the best XI on the field in the next match,” de Villiers said.
“If we win the series, there is room to try out a few new positions but we will look at that only after the next game.”