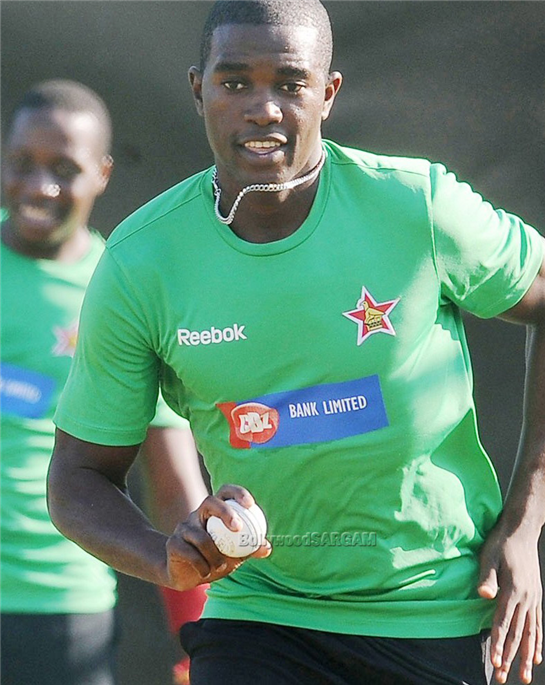 THE dismissal of Elton Chigumbura in the 42nd over was the turning point in the second ODI in Chittagong, both the captains – Mashrafe Mortaza and Chigumbura – agreed.
The Zimbabwe captain was run-out just inches short of his crease after Sabbir Rahman hit the stumps direct from mid-off. That moment sealed the game for Bangladesh as they went on to win by 68 runs.
Till Chigumbura’s dismissal, Zimbabwe had a chance. Chigumbura had made 38 off 31 balls with five boundaries, three of which came off a Mashrafe over in the batting Powerplay.
But then Zimbabwe lost their last three wickets in the 45th over to Arafat Sunny and the chase ending abruptly.
“I thought we were still in the game,” Chigumbura said.
“I thought I could bat myself to chase that score. It was going to be a special last five overs, an exciting game. I think 280 in the first game was also chaseable but we just made the same mistake once again in this game which is losing too many wickets.”
“There are three more games left and a lot can change. Just one game can change everything. I am sure if we win the next game, Bangladesh will be under very much pressure.”
Mashrafe, while agreeing that Sabbir’s run out of Chigumbura mattered a lot, added that Mominul Haque’s unbeaten 33 off 23 balls was vital for Bangladesh to post a decent total.
When he had arrived at the crease at No. 7, Bangladesh had badly slipped from 158 for no loss to 204 for 5. It soon became 204 for 6 and 225 for 7 but Mominul went after the bowling, hitting three boundaries towards the end.
“I thought Chigumbura’s run-out was crucial since he can strike hard from those situations. But I would say that Mominul’s innings in the end gave us the impetus to be where we needed to be. He played only 23 balls but it was a vital innings,” Mashrafe said.
Mashrafe also explained the decision to send Shakib Al Hasan, Mushfiqur Rahim, Sabbir Rahman and Mahmudullah ahead of Mominul as a pre-planned move, designed to push the scoring once Tamim and Anamul would provide a solid base.
He said that perhaps some of the batsmen got confused with the situation as they often don’t walk into such a good position.
“Our most in-form batsmen were Shakib and Mushfiqur,” he said.
“We wanted them to play the most number of overs. The openers batted for 33 overs today, so we wanted to send our best batsmen at the stage.Advertisement

“It was planned before the game that once the openers give us a good start, we would send them ahead. One part of that plan was successful.”
“We started off very well. But I think some of the batsmen got a bit confused,” he added.
“They usually don’t bat in these situations. Maybe they didn’t understand what to do. The collapse didn’t let us build a big score. I think we can improve in that area.”
Chigumbura was glad that his bowlers and fielders stood up to the challenge after being down 1-0 in the series.
Mire too, who made his maiden half-century in only his second game, impressed the captain.
“I think there were few parts where the bowlers bowled brilliant,” Chigumbura said.
“The fielders provided the energy and it was very enthusiastic. But we didn’t manage to do the same thing with the bat.
“It is always good to see one of your youngsters making some runs and increasing confidence especially in his second game,” he said.
“So hopefully he can carry what he did today in the rest of the series.”