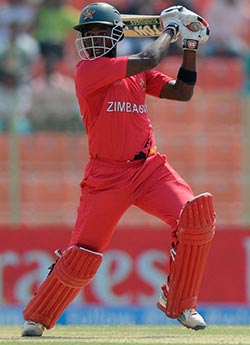 Brief Scores: ZIMBABWE 118/5 (E. Chigumbura 53*, M. Guruge 18/2) bt UAE 116/9 (S. Patil 30, S. Williams15/3) by 5 Wickets
Zimbabwe did what it had to do in beating the United Arab Emirates by five wickets on Friday, but it missed out on the World Twenty20 second round on run rate.
The Netherlands did Zimbabwe a favour later by toppling Ireland, but in doing so in the best match of the qualifiers, the Dutch topped the group on run rate and advanced.
Zimbabwe raced to 118-5 in 13.4 overs after the UAE was restricted to 116-9.
Elton Chigumbura hit a rapid 53 not out with six fours and three sixes off 21 balls. The last six straight back over bowler Kamran Shazad sealed the win in emphatic fashion.
UAE, which lost its third straight, had a chance for an upset when it had Zimbabwe at 34-4.
But Chigumbura opened his innings with a six and a four in his first two balls to steady Zimbabwe and help his team avoid an embarrassing loss.
Timycen Murma was 22 not, and Vusi Sibanda contributed 16.
Sean Williams claimed a career-best 3-15 for Zimbabwe, while Chatara and Sikandar Raza were 2-21 and 2-15 respectively.
Swapnil Patel top-scored for UAE with 30, and captain Khurram Khan had 26.