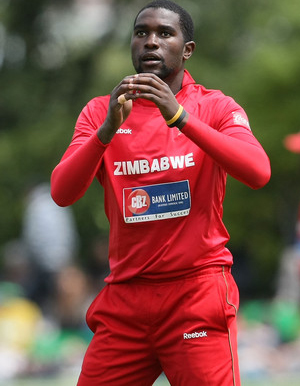 ZIMBABWE captain Elton Chigumbura has challenged his team to prove they are not a “small team” at the Cricket World Cup.
Chigumbura argued his side will prove their critics wrong at the Cricket World Cup, ahead of their tournament opener against South Africa on Sunday.
Widely considered the weakest of the International Cricket Council’s (ICC) full members, Zimbabwe have been nominated by many pundits as ripe for an upset against associate members Ireland and United Arab Emirates in Pool B of this year’s World Cup.
But having defeated Sri Lanka by seven wickets in a warm-up match on Wednesday, plus ripping through New Zealand’s batting line-up on Monday in a match abandoned due to rain, Chigumbura insists Zimbabwe can challenge the likes of first-up opponent South Africa at cricket’s flagship event over the next six weeks.
“People can call us a small team but I believe in this tournament that, if we play our best cricket, the tables will change,” the 28-year-old skipper said at a media conference on Saturday.
“Looking at the games we’ve played recently, there are good signs, guys are believing that they belong here.
“Now, obviously, in the main games, we just don’t have to panic. We have to do the processes right and the result will take care of itself.”
Hamilton Masakadza scored an unbeaten 117 for Zimbabwe in their victory against Sri Lanka in Lincoln, while Brendan Taylor and Sean Williams both notched half-centuries.
Chigumbura underlined the importance of such a result for Zimbabwe against the 2011 World Cup runners-up.
“It gives us a lot of confidence,” he said.
“It gives us a lot of that belief that we need as a team – that it’s possible to beat a big team… we’re looking forward to the main games now.”
When challenged by a journalist that South Africa look down on their northern neighbours on the cricket field, Chigumbura reiterated his belief that Zimbabwe could surprise their critics in Hamilton.
“They [South Africa] need to come and prove that right… as an underdog team the only thing we can focus on is play our best cricket and change the tables,” the all-rounder said.
A win Sunday over its much larger neighbour, which overshadows Zimbabwe not only in sports but also in politics and wealth, would be especially savoured by the nation of 14 million.Advertisement

Zimbabwe has beaten South Africa only twice in 37 one-day international matches dating back to 1992.
With one match finishing without a result, that’s given South Africa a daunting 94 percent win rate. Yet the rivalry remains fierce between the only two African nations in the tournament.
South Africa captain AB de Villiers knows the danger that the likes of Brendan Taylor can pose because the pair have a personal rivalry stretching back two decades.
“They’re a dangerous side,” de Villiers said Saturday.
“They’ve come a long way and I think they’re under good leadership at the moment from the captain and the coach. So definitely a side to be reckoned with.”
De Villiers said he believes he first played Taylor, now a close friend, in a match for under 11-year-olds.
“He’s just always been that thorn in the side for us, growing up,” de Villiers said. “And he’s still a great, great player and he’s done so well in his career. So lots of credit to him. We are well aware of his capabilities.”