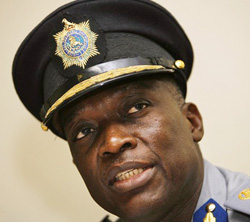 POLICE Commissioner General Augustine Chihuri has launched a book chronicling the history of policing in Zimbabwe since the colonial era.
Titled ‘The history of policing in Zimbabwe”, the book was part of Chihuri’s thesis for his doctorate from Mount Carmel Institute of Business Intelligence.
It was launched over the weekend with the $ 6, 500 auctioned copy taken by one of his subordinates, Commissioner- Robson Mpofu.
In the book, the police boss chronicles the formation of the force, the challenges and how the ZRP handled the land reform program which he said is a very emotive political issue.
“The issue of land is a political question. The book tries to explain how the police handled it and what should be done to ensure disputes of such nature are resolved amicably,” Chihuri said.
The book also deals with the incidents that followed the rise of the opposition MDC in 1999 and how the police dealt with the matter.
It further talks about policing under the inclusive government which was made up of three fighting parties-the two MDCs and Zanu PF.
Home Affairs minister Ignatius Chombo who was one of the guests at the launch said the book by Chihuri should be read by all police officers.
Samantha Chihuri, daughter to the police boss, also launched her fiction book titled-Chaotic which is about a young girl who abandons her homeland for a foreign country where she manages to successfully settle and adapt.
The launch of the two books was also witnessed by state security minister Kembo Mohadi, local government minister, Saviour kasukuwere and War Veterans minister Christopher Mutsvangwa among others.
Also in attendance were senior police commanders, business executives, ex-police officers among others and they all scrambled for the book which was going for $100 with Chaotic being the bonus.Advertisement