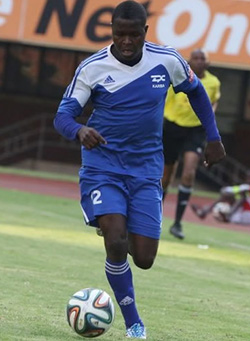 LIMITED Chikafa has returned to ZPC Kariba as coach Sunday Chidzambwa bids to arrest the club’s decline in the Castle Lager Premiership.
Chikafa spent six months with How Mine in Bulawayo, but resumed training with ZPC on Tuesday after a deal was reached between the two clubs.
The veteran striker, who has seen duty at the now defunct Railstars and Caps United, played for ZPC in their mazy debut in 2014 when they finished in second position and made it into the Soccer Stars of the Year calendar.
The striker is reunited with Patson Ndabambi, who was the team manager under Saul Chaminuka last year, but is now the assistant coach.
“We are looking at turning things around quickly and we believe his experience will come in handy,” said Chidzambwa.
His next match, next Sunday, is against defending champion Dynamos at Rufaro.
Things have not been well at ZPC since Chidzambwa took over the club a month ago, suffering a 1-0 defeat to Triangle away before a 1-0 loss to Tsholotsho at home.
He then drew 0-0 against Tsholotsho in Bulawayo. But alarm bells started ringing last week when they were beaten 2-1 at home by Triangle, to remain in 11th place with 16 points.
Caps United’s Leonard Fiyado has also been signed by ZPC together with veteran former Warriors and Kaizer Chiefs defender Thomas Sweswe.