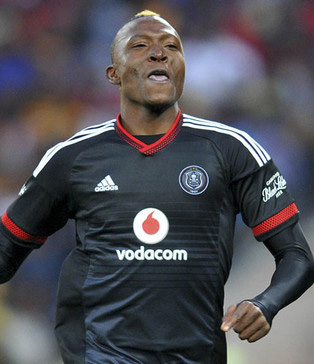 Legendary Zimbabwe defender Innocent Chikoya is happy for his countryman, Tendai Ndoro, who is making the best of the opportunity given to him at Orlando Pirates.
Ndoro has been enjoying regular game-time since netting a brace during Pirates’ 3-1 Absa Premiership victory over his former side Mpumalanga Black Aces away in mid-February.
“It goods that Ndoro is making good use of the opportunity handed to him to play regular football,” Chikoya told Goal.
The 27-year-old frontman has now netted four goals in all major competitions for the Buccaneers thus far this season.
“His confidence is high now that he is scoring goals and must continue to work hard because you cannot rest on your laurels at a big team like Pirates,” the former Bucs star continued.
Chikoya, who also played for Manning Rangers as a left-back, discussed Eric Tinkler’s Bucs squad.
“I also think having a big squad is good for Tinkler as he is spoilt for choice, even, when key players are injured as has been the case for Pirates after a long season playing in Africa as well,” Chikoya concluded.Advertisement