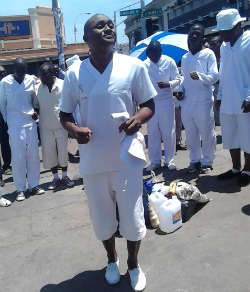 HARARE shoppers were last weekend treated to a rare free gospel show by inmates serving time at Chikurubi Farm Prison who sang old and latest songs from their two albums.
The 18 all male sweet melodic vocal group is known as Tehillah Worshippers and they sing vapostori and imbube songs effortlessly.
In between song and dance, inmates took turns to share their criminal life and how they have since given their lives to Jesus.
They appealed for forgiveness from the people they have wronged in the past.
Judging by their acts, it showed that they had put a lot of effort to produce polished products that would appeal to anyone. As the prisoners performed and gave their testimonies, some people danced along and nearly shed tears.
The group’s albums, Vimba naJesu and Shungu Dzangu, were also on sale for one dollar each while the DVD with songs from both projects was going for $2.
Giving his testimony after leading in the song ‘Havangatirasise’, Jacob Chouviri, who is serving time for culpable homicide, said he was left with only two months after having been sentenced to 5 years in prison.
“When I was out there I thought I was clever and used to do what I thought was right,” said Jacob.
“One day, I was driving a lorry full of cement and ran over a pedestrian who was to die a month later and to make matters worse I had diverted the route because I wanted to use the $100 that I was given at work for personal use.
“In as much as I have served my 5 year jail term and I will be going home soon, what about the family of the man I ran over, that man is not coming back.
“I ask for forgiveness from the family and my family as well who also now carry a name tag “ndivo amai vevana vemunhu wekutsika munhu akafa (that’s the mother of the man who ran over and killed a person).”
Chouviri said he has accepted Jesus as his personal saviour and hopes that he will continue to sing and spread the word of God through music.
His colleague, who was selling the group’s albums, said they are getting popular day by day and they are now being hired to perform at church and wedding functions.
“We get hired for a fee to perform at churches and other social gatherings and we share the money among ourselves; the money will help members after release.Advertisement

“We are also being told by prison officers that our music is getting reviews on national radio stations.”