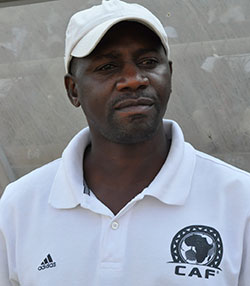 POWER Dynamos of Zambia coach Tennant Chilumba has confirmed that he has been approached by Highlanders Football Club for next season.
Chilumba however said he was, for now, solely focused on Power’s chase for the 2014 FAZ Super Division table with two matches left to play.
“I have never applied for the job; they contacted me,” Chilumba said. “My contract with Power is still on for the next three years.
“My focus is with Power Dynamos and everything I am doing now is for Power Dynamos because I want to win something with Power Dynamos.”
Chilumba is familiar with Zimbabwean football after coaching Hwange and FC Platinum before returning to Zambia in June, 2013 to coach Power.
He reached the second round of the Caf Confederations Cup in 2012 with Hwange.
Chilumba, who led Hwange to a fifth place finish in 2011 and was named the coach of the year, could replace Mark Mathe, who took over from another Zambian, Kelvin Kaindu, in September.