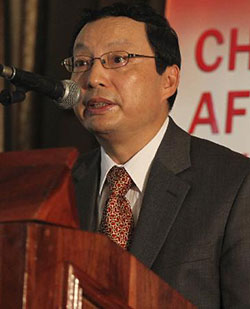 CHINA Africa Sunlight Energy says it will complete its coal mine and a 300 megawatt power station at its concessions in Gwayi, Matabeleland North by 2016, creating over 4,500 jobs.
Addressing delegates at a Parliament seminar on Thursday, the company’s deputy general manager Charles Mugari said as part of the first phase of the project, the company will build a modern residential complex for 2,000 workers, a coal mine and power plant.
“By 2016 we hope that the mine will be up and running,” he said, adding that the company was converting its special grant to a special mining right.
He said second phase of the power project will focus on methane gas extraction and another 300MW plant to be completed in mid-2017. The company intends to establish another 400MW plant powered by methane gas.
China Africa is a 50/50 joint venture between Zimbabwe’s Old Stone Investments and Shandong Taishan Sunlight of China, plans to spend $2.1 billion in the next five years on power generation, coal mining and methane bed gas extraction in  Matabeleland north.
“We have embarked on a very comprehensive exploration process and by end of this year we will know exactly the minable reserves of methane gas,” he said.
Mugari said the projects, which would be carried out on 100,000 hectares of land would create 4,500 jobs in the next two years in a country where over 80 percent of the adult working population is unemployed.
The company is also planning to build hotels and business complexes.
“This is going to be the beginning of the creation of an economic zone which will attract more foreign direct investment,” he said.
China Africa will also establish a coking plant for coal required in processing of steel.
Mugari said they had entered into a power purchasing agreement with Zimbabwe Electricity Distribution Company (ZETDC) although tariffs were being finalised.
A transmission arrangement with the Zimbabwe Energy Regulatory Authority had also been agreed upon.
“We have also completed our environment impact assessment  for the mine and right now we are working on the EIA for the power generation and the documents are with the Environment Management Agency,” he said.
The company is also working with the water ministry to assist in the construction of the Gwayi-Shangani dam which it seeks to benefit from.Advertisement

Mugari urged Parliament to come up with conducive legislation that encourages foreign direct investment and for government to harmonise its licencing regulations.
On Wednesday another company, Shangani Energy Exploration (SEE), said it has plans for $780 million gas project and build a 400 megawatt power station in the same area.