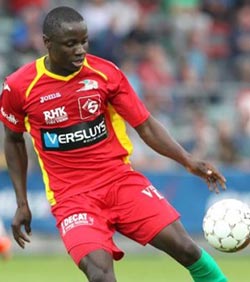 WARRIORS forward Nyasha Mushekwi will miss Sunday’s 2017 Afcon qualifier against Malawi at the National Sports Stadium, due to club commitments.
Mushekwi plays for Chinese second tier side Dalian Yifang who could not release him for international duty.
The Chinese League One is ongoing despite the current international period and Dalian Yifang will on Friday host Tianjin Quanjian as they press for promotion into the Super League.
With 11 games having been played so far in the League One, Dalian Yifang are on position four with five points behind leaders Qingdao Huanghai.
Mushekwi has so far scored nine goals, making him an important asset to Warriors coach Callisto Pasuwa had he made it for international duty.
“Of course Nyasha is a player we would have wanted considering we have a big game ahead of us. But his club wants him to play as they have a game at the weekend,” Pasuwa said.
“There is nothing we can do about it. We understand their position even if we felt he was going to be a big boost to us. We will just try to make do without him.”
Mushekwi’s absence might not be much of a headache for Pasuwa who still has Knowledge Musona, Evans Rusike, Tendai Ndoro and Matthew Rusike to select his strikers from.Advertisement