China is happy to continue cooperating with Zimbabwe for mutual success in various sectors, the Chinese ambassador to Zimbabwe Guo Shaochun said.

The incoming ambassador made the pledge after presenting his credentials to President Emmerson Mnangagwa in Harare on Thursday.

“We have made great achievements on the practical cooperation over the last few years and we are very confident that we will have more successful cooperation in the future,” Guo said.

“Also, we have very strong political, mutual trust. We support each other in bilateral occasions and I think we will continue with such successful cooperation in the future.” Ambassador Guo said.

Chins has cooperated with Zimbabwe to accomplish various projects in the southern African country, among which include the Kariba South Hydro Power Expansion project which added 300 megawatts to the national grid and the expansion of Victoria Falls International Airport.

China also in 2018 launched another project in Zimbabwe, the expansion of the Harare International Airport, which is seen as s key step in opening up Zimbabwe for foreign investments and tourism. 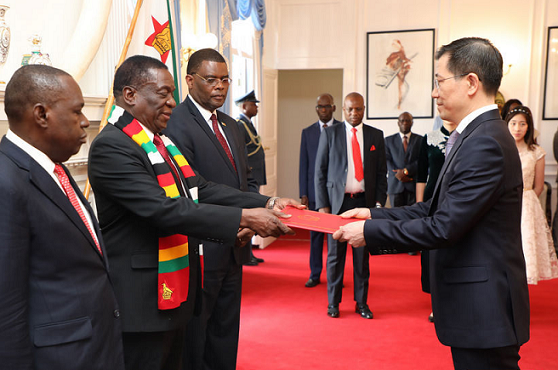